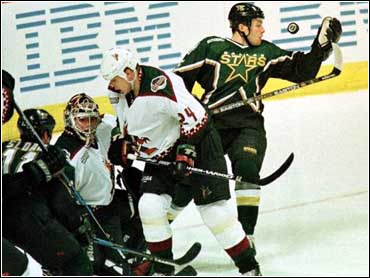 Brendan Morrow is making the most of his audition.

Morrow had a goal and an assist and Ed Belfour made 19 saves for his 48th career shutout as the Dallas Stars beat the Phoenix Coyotes 2-0 Thursday night, leaving the teams tied for the Pacific Division lead going into the All-Star break.

Morrow is one of several youngsters forced into action because of injuries to the Stars' top players. Among those who did not play Thursday were Derian Hatcher, Joe Nieuwendyk, Jere Lehtinen, Jamie Langenbrunner and Richard Matvichuk.

"We're getting some ice team and we want to prove that we should be playing," Morrow said. "When the injured guys come back, we still want the ice time."

Not much offense was needed thanks to Belfour, who has won seven of his last eight starts.

"The guys really worked tonight and played a tough defensive game," said Belfour, who has three shutouts this season and is the career leader among active goaltenders. "It was nice to see with how many guys we have out of the lineup."

Belfour's chances were aided when Phoenix's Shane Doan was handed a five-minute major penalty and game misconduct for checking Richard Jackman into the boards from behind with three minutes remaining.

The Coyotes managed only three shots on goal in the third period.

"We might as well just have given the game before the game even starte," said Jeremy Roenick, whose seven-game point streak was snapped. "We weren't prepared. We weren't ready. We made dumb decisions all night and we played bad and they took advantage of us."

Mike Modano scored the other goal for Stars, who won for the sixth time in seven games and snapped the Coyotes' five-game home winning streak. Phoenix had not lost at home since dropping a 5-4 decision to Edmonton on Jan. 1.

Despite the loss, the Coyotes entered the three-day break with a share of the division lead for the first time in franchise history. Phoenix and Dallas each have 65 points.

"I can't say we've let our guard down," said Phoenix coach Bob Francis, whose Coyotes have five wins and a regulation tie in their last seven games (5-1-0-1). "You look at our record over the last dozen games or so and we've taken care of business."

Morrow did most of the damage single-handedly in the first period.

Just over a minute into the game, he deflected Teppo Numminen's pass off the defenseman's stick across the front of the crease. Morrow gained control of the puck to the right of the net. Bob Essensa stopped the first shot, but Morrow scored on the rebound to give Dallas a 1-0 lead.

"I didn't get a whole lot on the first one, but it came right back onto my stick and I had a whole lot of net to miss," Morrow said.

Morrow also had a hand in the Stars' second goal at 15:51 of the first period. Morrow grabbed the puck out of the air to the left of the crease, dropped it onto his stick and shot from close range.

Essensa again made the initial save, but Modano took the rebound to the left of the net, circled back to the left faceoff circle and flipped a quick wrist shot over the Essensa's outstretched glove for his team-leading 22nd goal.

"We just didn't play well in the first period and it cost us the hockey game," Dallas Drake said. "They got two goals and shut us down."

The Coyotes' best scoring chance came midway through the second period when a Dallas bench minor for too many men and a delay penalty on Belfour gave Phoenix a two-man advantage for 1:09. But Belfour, who just over a minute earlier stopped Jyrki Lumme on a two-on-one rush, stopped both shots he faced to preserve the shutout.