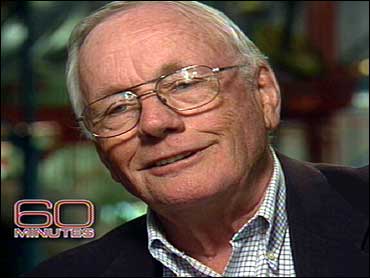 On July 20, 1969, Neil Armstrong stepped out of an odd-looking spaceship and into the pages of history as the first man on the moon.

Today, he remains one of the most famous people on the planet, but he is also famously private. For years, Armstrong has shunned the media and the limelight, but last fall he took a giant leap back into the public view. He has finally authorized a biography, entitled First Man and written by James Hansen.

In November, he agreed for the first time to a television profile, speaking to 60 Minutes correspondent Ed Bradley about his extraordinary life.

Neil Armstrong still remembers the powerful liftoff of Apollo 11. "It felt like a train on a bad railroad track, shaking in every direction. And it was loud, really loud."

Armstrong is 75 now, an aging hero, but his winning smile is still there. We remember him as the cool, confident commander of Apollo 11, joined by his crewmates, Buzz Aldrin and Michael Collins.

On a windswept day, Bradley went with Armstrong to an old Apollo launch pad at Kennedy Space Center to hear the story of one of man's greatest adventures.

"That July morning in 1969, when you came out and you gave that thumbs-up, I mean, that was a very confident view you put on," says Bradley.

"Yeah, but a little bit of a sham, I admit," says Armstrong. "You know, the reality is, a lot of times you get up and get in the cockpit, and something goes wrong somewhere and you go back down. So, actually, when you actually lift off, it's really a big surprise."

Perched atop a Saturn 5 rocket, the astronauts were on their way to meet the challenge President Kennedy had made eight years earlier: to land a man on the moon and return him safely to earth before the end of the decade.

It took 400,000 workers and $24 billion, intended in large part to prove American superiority over the Soviets.

Armstrong acknowledges that the hopes of the nation were riding on the mission. "We wanted to do well. And, even more than that, you hope that you don't, you as a person, don't make any mistakes."

And he didn't. Armstrong's entire life had prepared him well, starting with a childhood fascination with flight. He earned his pilots license at 16 before he learned to drive. By age 21, he was flying combat missions over Korea. After the war, he became a hotshot test pilot, flying the famous X-15 at 4,000 miles an hour to the edge of the atmosphere.

It was during that time, in 1962, when he faced his most difficult test, losing his 2-year old daughter, Karen, to brain cancer.

Armstrong poured himself into his work. "I thought the best thing for me to do in that situation was to continue with my work, keep things as normal as I could. And try as hard as I could not to have it affect my ability to do useful things."

"But that's not an easy thing to do. How do you think you did?" Bradley says.

"At the time I thought the family was handling it well. And I was doing the best I could," Armstrong says.

During that same difficult year, Armstrong was chosen to be an astronaut. He flew his first space mission in 1966 on Gemini 8, and nearly lost his life when his tiny capsule briefly spun out of control.

He cheated death again two years later, while flying an experimental device designed to simulate a lunar landing. When it malfunctioned, Armstrong was sitting at the controls. He ejected barely 100 feet from the ground.

After the almost-fatal ordeal, Armstrong went back to his office to do some paperwork. "I did. There was work to be done," says Armstrong, matter-of-factly.

"Wait a minute. You were just almost killed," Bradley says.

"Well, but I wasn't," says Armstrong.

Armstrong stood out, even among a class of astronauts that had the right stuff. His depth of experience and nerves of steel earned him, at age 38, the command of Apollo 11. The trip to the moon took four days; after achieving lunar orbit, Michael Collins would remain in the command module, while Neil Armstrong and Buzz Aldrin climbed into the lunar module, undocked, and began their descent.

But the landing took an unexpected turn: the onboard guidance system was sending Armstrong and Aldrin right towards disaster.

Armstrong overrode the autopilot and looked for a safe place to land, but the detour cost them precious fuel, and they were about to run out.

A worldwide television audience of a nearly a billion people was on the edge of their seats and so was CBS' own Walter Cronkite. 60 Minutes couldn't resist reuniting the former anchorman with the former spaceman. There are things they can laugh about now but, at the time, those final seconds were almost unbearable.

Then came Armstrong's famous words: "Houston, Tranquility Base here. The eagle has landed."

"Roger, Tranquility, we copy you on the ground, you got a bunch of guys about to turn blue. We're breathing again. Thanks a lot," mission control replied.

"It turned out I didn't have anything to say at all except, 'Wow, oh, boy. Oh, boy,' " Cronkite says, laughing. "Perfectly speechless."

The ghostly image of man on the moon was beyond words. Armstrong paused on the bottom rung of the ladder and planted his left boot on the lunar dust.

"That's one small step for man, one giant leap for mankind," Armstrong said as he set foot on the moon.

"Do you recall how you came up with that 'A small step for man?' What was the inspiration for it?" Bradley asks.

"I thought, 'Well, when I step off, I just gonna be a little step.' … But then I thought about all those 400,000 people that had given me the opportunity to make that step and thought 'It's going to be a big something for all those folks and, indeed, a lot of others that even weren't even involved in the project.' So it was a kind of simple correlation of thoughts," Armstrong says.

Armstrong clearly remembers the lunar surface. "It's a brilliant surface in that sunlight. The horizon seems quite close to you because the curvature is so much more pronounced than here on earth. It's an interesting place to be. I recommend it."

Armstrong and Aldrin spent just a short time on the lunar surface, testing the gravity, completing a long list of experiments, and marking their journey. They had come in peace for all mankind, but stayed less than a day.

The hard part was re-entry. But when they returned to earth, they were superstars. In New York, four million people showered them with ticker tape. On a 45-day victory lap around the world, they were met by crowds in the Congo and by the queen at Buckingham Palace.

But as Armstrong reveals in his new biography, published by CBS sister company Simon & Schuster, he was unprepared for his sudden celebrity, and found it to be both a blessing and a burden.

"Friends and colleagues all of a sudden looked at us, treated us slightly differently than they had months or years before when we were working together. I never quite understood that," Armstrong says.

"You said once to a reporter, 'How long must it take before I cease to be known as the space man?' Why did you make that comment?" Bradley says.

"I guess we all like to be recognized not for one piece of fireworks, but for the ledger of our daily work," Armstrong says.

Strolling around the Ohio farm where he was born, Armstrong is easy to talk to, but hard to know. He can seem guarded, but above all we were struck by his humility.

"You sometimes seem uncomfortable with your celebrity. That you would rather not have all of this attention," Bradley says.

"No, I just don't deserve it," Armstrong says, laughing.

"But look. How many people have walked on the moon? Twelve? You were the first. You were chosen to do that. That's special," says Bradley.

"Yeah, I wasn't chosen to be first. I was just chosen to command that flight. Circumstance put me in that particular role. That wasn't planned by anyone," Armstrong says.

After Apollo 11, Armstrong hung up his spacesuit, and never felt the need for an encore. For eight years, he taught engineering at the University of Cincinnati, surely the students' only professor who had walked on the moon.

"In the midst all your professional achievements, you've managed to get married, to have a family. Was it a difficult balance for you to maintain both sides of your life?" Bradley asks.

"The one thing I regret was that my work required an enormous amount of my time, and a lot of travel," Armstrong says. "And I didn't get to spend the time I would have liked with my family as they were growing up."

Armstrong has two sons with his wife of 38 years, Janet, who divorced him in 1994.

He remarried several years ago. In the autumn of his life, he lives very much in the present, refusing to let his famous deed define him. He has made a comfortable living serving on corporate boards, but even in retirement he keeps a watchful eye on the space program. He would like to see it restored to its glory days.

Armstrong knew the Apollo program had a limited life but expected it to last longer. "I fully expected that, by the end of the century, we would have achieved substantially more than we actually did."

"And why do you think we didn't continue?" Bradley says.

The man who once rode a 160-million horsepower rocket now flies a glider, a plane with no engine.

"Gliders, sail planes, they're wonderful flying machines. It's the closet you can come to being a bird," says Armstrong.

What does Armstrong get out of gliding? "Oh, it is self satisfaction. A sense of accomplishment. At trying to do a little better than you think you possibly can," he says.

NASA recently announced plans to send men back to the moon by 2018 and later to Mars. Don't think Neil Armstrong hasn't noticed.

"You said you would like to see us go back to the moon, and then go on to Mars. Something you want to do at this point in your life?" Bradley asks.

"I don't think I'm going to get the chance. But I don't want to say I'm not available," Armstrong says, laughing.

Why victims of internet lies want Section 230 repealed
Thanks for reading CBS NEWS.
Create your free account or log in
for more features.
View CBS News In
CBS News App Open
Chrome Safari Continue
Be the first to know
Get browser notifications for breaking news, live events, and exclusive reporting.