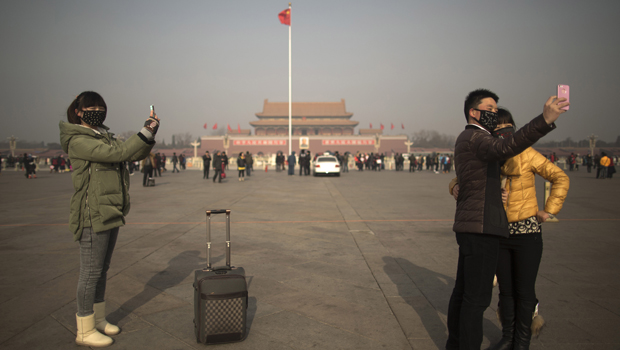 The air took on an acrid odor, and many of the city's commuters wore industrial strength face masks as they hurried to work.

"I couldn't see the tall buildings across the street this morning," said a traffic coordinator at a busy Beijing intersection who gave only his surname, Zhang. "The smog has gotten worse in the last two to three years. I often cough, and my nose is always irritated. But what can you do? I drink more water to help my body discharge the toxins."

The city's air quality is often poor, especially in winter when stagnant weather patterns combine with an increase in coal-burning to exacerbate other forms of pollution and create periods of heavy smog for days at a time. But the readings early Thursday for particles of PM2.5 pollution marked the first ones of the season above 500 micrograms per cubic meter.

The density of PM2.5 was about 350 to 500 micrograms, and had reached as high as 671 at 4 a.m. at a monitoring post at the U.S. Embassy in Beijing. That is about 26 times as high as the 25 micrograms considered safe by the World Health Organization, and was the highest reading since January 2013.

Serious air pollution plagues most major Chinese cities, where environmental protection has been long sacrificed for the sake of economic development. Coal burning and car emissions are major sources of pollution. In recent years, China has beefed up regulations and pledged financial resources to fight pollution.

In the far northeastern city of Harbin, some monitoring sites reported PM 2.5 rates of up to 1,000 micrograms in October, when the winter heating season kicked off. In December, dirty air gripped the coastal city of Shanghai and its neighboring provinces for days, with the density of PM 2.5 exceeding 600.

Beijing authorities said the haze on Thursday has reduced the visibility to several hundred yards and that the severe pollution is likely to continue through Friday.