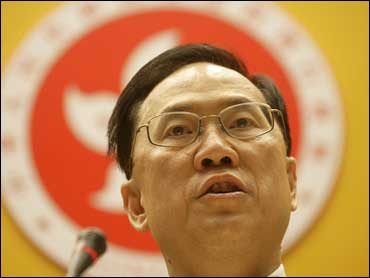 Beijing will allow Hong Kong to directly elect its leader by 2017 and all its lawmakers by 2020, the territory's chief executive said Saturday, immediately sparking criticism from democracy activists who sought a faster timetable.

"A timetable for obtaining universal suffrage has been set," Donald Tsang said. "Hong Kong is entering a most important chapter of its constitutional history."

The government in Beijing has been debating Hong Kong's political development and was expected to make an announcement later Saturday about a timetable for direct elections.

Many had feared it would stop short of allowing full democracy in the booming financial capital, and the decision caught some political observers by surprise.

Tsang, who announced the decision during a televised press conference early Saturday, said Beijing's move was a clear reflection of the wishes of the Hong Kong people. But the decision did not please opposition democratic leaders, who have called for direct elections in 2012, the date of the next leadership race.

"We are extremely disappointed, you could say we are furious, about this decision in ruling out 2012," Democrat Party chairman Albert Ho told government-run RTHK radio station. "The wishes of the Hong Kong people have been totally ignored."

When Hong Kong returned to Chinese rule in 1997 it was granted a wide degree of autonomy and a pledge that it would ultimately be allowed to directly elect all of its legislators and its leader, although no date was ever given.

A decade on, still only half of the 60-seat legislature is elected, and the territory's top leader, or chief executive, is chosen by an 800-strong committee full of Beijing loyalists.

In calling for direct elections in 2012, opposition democrats say the city is mature enough to choose its own government. But Beijing and its allies in Hong Kong's legislature have appealed for a more gradual approach, citing 2017 as the most acceptable date.

The issue has polarized Hong Kong's political camps and society, with pro-democracy activists staging hunger strikes, marches and protests to press their demands.

Tsang urged all parties to put aside their differences and start thinking about how to implement direct elections for the chief executive in 2017. A task force will be set up to discuss how best to amend electoral methods, with the first changes made in 2012, he said.

"We must treasure this hard-earned opportunity," he said.

Political observers were somewhat surprised by the announcement.

"Most people had expected Beijing would allow direct elections for the chief executive in 2017. But Donald (Tsang) has made it quite clear that they also have allowed direct elections for lawmakers by 2020," said Ivan Choy, a political analyst at the Chinese University.