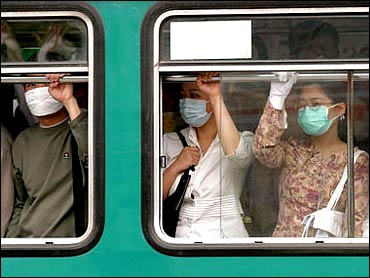 The World Health Organization lifted its travel warning against Beijing on Tuesday, giving a clean bill of health to the capital of the nation where the SARS outbreak began.

"We don't consider that travel to Beijing any longer poses a threat, at least from the point of view of SARS," WHO spokesman Ian Simpson told CBS Radio News.

Beijing was the last place in the world under a WHO advisory urging travelers to avoid nonessential travel because of concerns about severe acute respiratory syndrome, which first surfaced in southern China in November.

Toronto and Taiwan remain on a WHO list of places with recent local transmissions of the disease, but travel advisories against them have been lifted.

"At one point there were numerous (travel advisory) recommendations for Hong Kong, Taiwan, many parts of China and so on, but right now, Beijing was the last one and we have just been able to lift it," Simpson said.

The SARS crisis peaked in March and April before ebbing worldwide as officials moved to isolate patients in quarantines and screen travelers for symptoms. The disease killed more than 800 people, and infected more than 8,400.

Shigeru Omi, WHO regional director for the western Pacific region, said the decision to lift the Beijing advisory was based on factors including the number of current SARS cases, quality of surveillance and the effectiveness of prevention measures.

"SARS is definitely coming under control in China," said Simpson, in Geneva. "There are still cases in Beijing, there are still a few cases elsewhere in China, but the numbers are dropping very fast and we hope there will soon be no cases of SARS in China."

Beijing also was simultaneously removed from a WHO list of places with recent local transmissions of the disease.

Removal from the recent transmissions list comes after a place has gone 20 days since isolating its last confirmed case of SARS — defined as twice the incubation period of the disease.

"WHO has concluded that the chain of person-to-person transmission in Beijing has been broken," Omi said.

The number of people hospitalized with SARS in Beijing fell to just 43 on Tuesday, the Health Ministry said. That was down from more than 1,000 at the height of the epidemic, which prompted Beijing to build a special SARS isolation facility.

"The number of cases overall has dropped quite dramatically," said Simpson. "All of them are in hospital, all of them are being treated, and all of them, we know where the disease came from."

Airlines, hotels and other travel-dependent businesses welcomed the end of the WHO advisory. They were devastated as Chinese and foreign tourists and businesspeople heeded warnings to avoid Beijing and other SARS-affected areas. Chinese airlines said passenger numbers nationwide fell by up to 83 percent in May.

"It is a monumental affair for the recovery of the Chinese civil aviation industry," said Cai Zhizhou, chief spokesman for China Southern Airlines, the country's biggest carrier. Cai said the airlines should recover gradually but "pretty fast."

"We must not let down our vigilance," Gao Qiang, the executive deputy health minister, said at the news conference with Omi.

Normal life has begun to resume in Beijing as numbers of new SARS deaths and cases fell over the past month, down sharply from mid-May, when China was reporting more than 150 new cases a day.

The Chinese Culture Ministry announced Tuesday that it would hold a symphony concert at the Great Wall on Saturday to celebrate "the Chinese people's battle" against SARS, the official Xinhua News Agency announced.

In Bangkok, Thailand, Asian officials met with WHO representatives to discuss strategies for preventing a recurrence of the SARS outbreak.

More than 60 delegates from member countries of the Association of Southeast Asian Nations as well as China, Japan, Hong Kong and South Korea gathered to map out ways of detecting and containing SARS.

"The main concern WHO has is that there's a considerable risk that SARS may strike back because there's still lack of effective treatment," said Dr. Bjorn Melgaard, the WHO representative for Thailand.

He expressed hopes the illness would be effectively controlled while experts develop a vaccine.