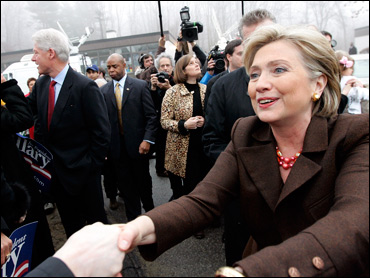 Economic concerns continue to weigh heavily on Democratic primary voters. Ninety-one percent of voters said the economy was not good or poor. Nearly half (48 percent) of voters cited the economy as the most important issue facing the nation, with the remaining voters splitting between the Iraq war (29 percent) and health care (29 percent).

Clinton was favored by a majority of voters who thought the economy and health care to be most important, while Obama was the choice for voters most worried about the war in Iraq.


Voters clearly wanted a new approach to deal with these problems. A majority (51 percent), said they wanted a candidate who could bring about change, as opposed to 23 percent who preferred a candidate with experience.

Coalitions that proved important in earlier primary states such as New Hampshire and South Carolina held once again, and fueled victories in states where these coalitions comprised a disproportionate part of the electorate. Obama did particularly well among blacks and young voters, whereas Clinton won the support of Latinos, white women, and the elderly.

Blacks turn out heavily for Obama

Black voters across the country threw their support overwhelmingly behind Obama. Nationally, 82 percent of blacks voted for Obama, compared to 17 percent who voted for Clinton. The margin was 85 to 14 among black men, and 80 to 18 among black women.

Turnout among black voters was heavy across the country, proving to be decisive in several East Coast states. In Georgia, where Obama defeated Clinton by more than 30 points in the popular vote, blacks comprised 51 percent of the electorate. Obama won 87 percent of their votes compared to only 12 percent for Clinton.

It was the same story in Alabama, where blacks comprised 51 percent of the Democratic electorate. They backed Obama by a margin of 84-15 percent. In Delaware, turnout among blacks was a whopping 12 points higher than in 2004, and comprised 28 percent of the electorate. Obama won the support of 86 percent of black voters in Delaware, compared to only 9 percent for Clinton.

Obama decisively won voters under 30 years of age. Nationwide, Obama won 56 percent of young voters, while Clinton was supported by 42 percent. Young men supported Obama by a margin of 64 -33 percent over Clinton, while young women supported Obama by 53-45 percent. The margins were similar among young people who attended college and those who did not.

Young people proved to be particularly crucial to Obama's victory in Connecticut. Obama won voters under 30 years of age by 19 points, receiving the support of 58 percent of this age group, compared to 39 percent who supported Clinton.

In Tennessee, elderly voters made up 28 percent of the electorate. Clinton won the support of 65 percent of elderly Tennessee voters, as opposed to only 26 percent for Obama.

The further strengthening of the coalitions built by Clinton and Obama may provide insights into the upcoming primary battlegrounds. On Saturday, Louisiana holds their Democratic primary. The large number of black voters in the state bodes well for Obama, who scored impressive victories in the nearby states of Alabama and Georgia with similar demographics.

The poll was conducted for the AP and the television networks by Edison Media Research and Mitofsky International as voters left sites in the Super Tuesday primary states. The Democratic poll interviewed 16,290 primary voters. The margin of sampling error was plus or minus 1 percentage point.

Samuel Best is the Director of the Center for Survey Research and Analysis and Associate Professor of Political Science at the University of Connecticut. He holds a Ph.D. in political science from SUNY-Stony Brook.

The poll was conducted for the AP and the television networks by Edison Media Research and Mitofsky International as voters left sites in the Super Tuesday primary states. The Republican poll interviewed 10,402 primary voters. The margin of sampling error was plus or minus 1.5 percentage points.