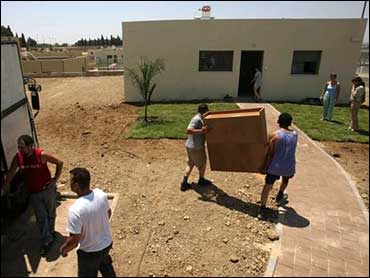 
You can be sure that the evacuation of Israeli settlers from the Gaza Strip and four, small West Bank settlements will one day be described as a concession to the Palestinians. It isn't.

Most of the focus on Israeli Prime Minister Ariel Sharon's "unilateral disengagement" plan has been on the disengagement part. That's mainly because the prospect of Israeli soldiers forcibly removing recalcitrant settlers from their homes has provoked the most controversy in Israel itself, prompting pro-settlement hard-liners to take to the streets in massive numbers and dire predictions of violent clashes between Jews.

But Israel isn't really disengaging from the Palestinians at all, not even in Gaza, where, if all goes to plan, there won't be a single Israeli settlement by the end of the summer. Israel will still hold the keys to Gaza, control its borders, its airspace and access to the sea. Palestinians have long described the Gaza Strip as the world's biggest prison. Disengagement won't change that. The prison guards will just be manning the walls instead of walking the cellblock corridors.

Although there have since been conversations between Israel and the Palestinian Authority about the disengagement, the plan is still unilateral, meaning entirely one-sided. Other than talks about things like who sweeps up afterwards, it's not up for discussion. Sharon is doing what he believes is in Israel's interests, not because he's suddenly become soft on Palestinians.

The Gaza settlements and the four isolated settlements in the northern West Bank are military liabilities, extraordinarily costly to defend. By giving them up (which many in Israel's military have long proposed) and by demonstrating to the watching world just how painful it was to do so, the Israeli government is gambling that it'll be easier to keep the remaining settlements intact, and perhaps expand them. Given the positive reception so far, it's a good bet.

This isn't a bit of Israeli trickery, as many Palestinians complain. Sharon's government has been pretty clear about its goals. The whole point of the "unilateral solution," says Deputy Prime Minister Ehud Olmert is "to maximize the number of Jews, minimize the number of Palestinians; not to withdraw to the 1967 border and not to divide Jerusalem." In other words: to avoid negotiations and give the Palestinians as little as possible.

And why negotiate? Palestinian President Mahmoud Abbas has been unable or unwilling to keep his previous promises to disarm terrorists. If he can't accomplish that essential task, what else is there to talk about?

With the obvious exception of the settlers, it's in everybody's interests to describe the "disengagement" as a good thing, if for different reasons. For most Israelis, it's a long-overdue step in the right direction. Palestinians in Gaza will be happy to see the settlers go and the militants among them will claim credit for Israel's retreat. For President Bush it is "progress" towards peace between Israelis and Palestinians.

But is it? What's lost in all this is that even after Israel withdraws from the Gaza Strip --assuming it does -- the two sides will still be further apart on the contentious issues of the conflict than they were five years ago, before the intifada began.