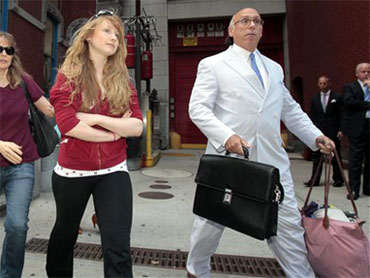 Rudy Giuliani and his family were in the public eye for years, first during his high-profile career as New York City mayor and then a presidential candidate.

Now they're back in the spotlight, after Wednesday's arrest of his daughter on shoplifting charges.

After being led away in handcuffs, Giuliani spent five hours in New York's 19th precinct lock-up. She was later released to her mother, Donna Hanover and a family attorney.

New York Mayor Michael Bloomberg told reporters, "When you're kids get in trouble, you do what's natural you try to protect them, and I think this is a private matter the Giuliani's have to work through."

Rudy Giuliani's office issued a brief statement, saying, "This is a personal matter and Mayor Giuliani asks the media to respect the privacy of his daughter at this time."

It's widely believed the 20-year-old is estranged from her famous father since her parents divorced in 2002.

Caroline Giuliani faces petty larceny charges and is due in court August 31st, but the charges will likely be dropped because the store is refusing to press charges.

But how do young well-to-do people find themselves in this situation at all?

Child and Adolescent Psychologist Dr. Jennifer Hartstein, an "Early Show" contributor, said shoplifting happens for a lot of reasons. However, according to the National Association for Shoplifting Prevention, about a third of people who shoplift have depression.

She added entitlement may also be a factor.

"There's this sense of, 'Well, I just deserve, it I'm going to take it, I'm going to do that and keep moving forward."

As for the two-thirds who don't have depression, Hartstein said some people may be using shoplifting as a substitute for a loss.

"Something happens and then they feel like they need to replace it, so they go and take things," Hartstein said.

She added justified payback is another factor, which could be at play in Giuliani's case.

Shoplifting for others may be a relief mechanism.

"It's to relieve some anxiety or negative sense of self, some negative feelings, similarly to someone who might drink, someone who might self-injure," Hartstein said. "It helps decrease a real sense of emotional disregulation and makes them feel better."

She continued, "It gives them a rush, it might give them the boost they need to make themselves feel more regulated and feel better."

So how can you help your child avoid a situation like this? Click on the video below for Hartstein's tips for parents.