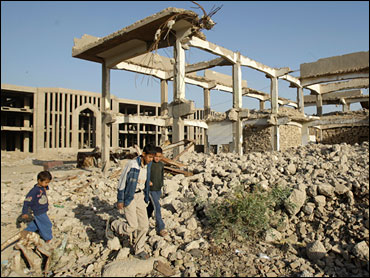 Six years after the U.S. invaded Iraq, the end of America's costly mission is in sight, but the future of this tortured country is much less clear.

With violence down sharply, most Iraqis feel more secure than at nearly any time since the war began March 20, 2003 - March 19 in the United States.

But violence still continues at levels that most other countries would find alarming. Last week, suicide bombers killed a total of 60 people in two separate attacks in the Baghdad area, and an American soldier was fatally injured Monday on a combat mission in the capital.

Fighting still rages in Mosul and other areas of the mostly Sunni north. Competition for power and resources among rival religious and ethnic groups is gearing up, even as the U.S. military's role winds down.

Both the Sunni and Shiite communities face internal power struggles that are likely to intensify ahead of national elections late this year. Sunni-Shiite slaughter has abated, but genuine reconciliation remains elusive.

"If Iraqi leaders don't reconcile and work together, the situation will deteriorate," veteran Kurdish lawmaker Mahmoud Othman said. "There is no harmony among Iraqi leaders. Their work depends on their mood."

At the same time, U.S. combat troops are due to leave by September 2010, with all American soldiers gone by the end of the following year.

At home, Americans' interest in the war has tapered.

In exit polls conducted on Election Day 2008, 63 percent said they disapproved of the war.
Ten percent said in a poll taken just prior to Inauguration Day in January that the war was a top concern for President Obama.

In the final stage of the war, America's challenge will be to prevent ethnic and sectarian competition from exploding into violence on the scale that plunged the nation to the brink of all-out civil war two years ago.

U.S. commanders successfully lobbied Mr. Obama to maintain a substantial combat force in Iraq through parliamentary elections at the end of the year in hopes of curbing violence as the country's religious and ethnically based parties compete for power in the national balloting.

Damage control is a far less ambitious goal than the Bush administration foresaw when the U.S. launched the invasion with an airstrike on Dora Farms in southern Baghdad in a failed attempt to kill Saddam Hussein.

Missing Saddam in the opening moments of the conflict set the tone for what became a war of missteps and disappointments before the tide turned in 2007.

The war was launched to deny Saddam weapons of mass destruction and when events proved he had none, the goal shifted - to establish a Western-style democracy in the heart of the Middle East. That goal was only partially achieved. 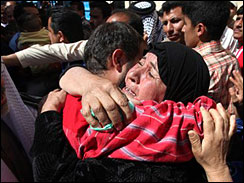 Iraq: 6 Years At War
Freed Iraqi prisoner Ahmad Jabbar, centre, embraces his mother Um-al Ahmad, with his father Abu Ahmad on the left, after being released at the Um Al-Quraa mosque in western Baghdad, Iraq, Thursday, March 19, 2009. (AP)
Now, the U.S. hopes that it can leave without the country disintegrating into chaos. The Americans hope Iraq will be strong enough to fend off interference by neighboring countries - notably Iran - and protect itself from a resurgent al Qaeda.

Prospects for a reasonably stable Iraq are certainly brighter than they were before the U.S. troop surge of 2007, when car bombs shook Baghdad daily and gangs of Sunni and Shiite gunmen ruled the streets.

Violence is down 90 percent. Much of the country is quiet, including the three Kurdish provinces of the north, the Shiite south and the Sunni-dominated Anbar province, where local tribes turned against al Qaeda.

Baghdad's parks are jammed on weekends with families only now feeling safe enough to venture from their own neighborhoods.

A survey of 2,228 Iraqis questioned nationwide last month for ABC News, BBC and Japan's NHK, found that 85 percent believed the current situation was good or very good - up 23 percent from last year.

About 59 percent felt safe in their neighborhoods, up 22 percent from last year, the survey said.

"We feel there's been a significant security improvement during the past months," said Ahmed Mahmoud Hussein, a health ministry employee in east Baghdad. "If sectarianism is wiped out and the security forces are equipped in a proper way, I think the country will see stability within five years."

But stability is difficult to measure in a country with a long history of underground movements - including Saddam Hussein's Baath party - and a tradition of tribal and other groups switching sides.

Sheiks who once cheered Saddam later worked with extremist groups and now proclaim their loyalty to the U.S.-backed government, and no one can be sure where their loyalties may go tomorrow.

In Wasit province, a Shiite area south of Baghdad, officials estimate major crimes such as kidnappings, murders and robberies have soared by 50 percent in the past two months. Aziz al-Amarah, an Interior Ministry commander, blames the rise on power struggles among local political parties.

Against this backdrop is the absence of power-sharing agreements among Sunnis, Shiites and Kurds that the U.S. has long believed were essential to ensuring lasting stability.

Legislation to manage the giant oil industry and distribute its wealth has been deadlocked in parliament for two years.

The central government and the Kurds have made little progress in resolving claims to a 300-mile swath of disputed territory in the north, including the oil-rich area around Kirkuk.

U.S. officials privately believe there is a very real chance of armed conflict between government troops and armed forces of the self-ruled Kurdish regional administration.

Many Iraqis fear that the relative calm simply means threat groups are laying low until the Americans leave.

"Iraq will face difficult economic situations for long time. ... The political process is still at a crossroads," Iraq's Shiite vice president, Adel Abdul-Mahdi, said last week. "The war is not over but it has just begun."