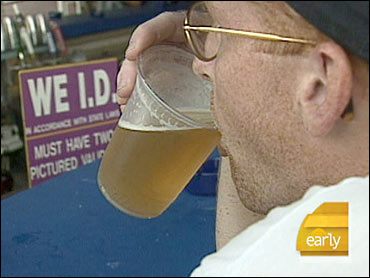 Downing a beer or two may actually help you stay healthy!

The American Heart Association considers 12 ounces one drink of beer, and a drink or two a day moderate intake for men and a drink a day morderate for women.

The AHA also cautions people NOT to start drinking alcoholic beverages if they don't already, and urges them to consult their doctors on the subject.

In the Nurses Health study, over 70,000 women ages 25 to 42 were examined for the association between alcohol consumption and the risk of hypertension. The study found that those who drank moderate amounts of beer (one beer) had less hypertension than nurses who drank either wine or spirits.

A large Kaiser Permanente survey of almost 130,000 adults showed that male beer drinkers in the group were at a statistically significantly lower risk of coronary artery disease than men who drank red wine, white wine or spirits.Beer is also rich in B-vitamins and folates (found in leafy green vegetables), both of which help keep homocysteine blood levels in check. High levels of the chemical homocysteine have been linked to increased risk of heart disease.

A study from Tufts School of Nutrition showed beer, either dark or light, protects bone mineral density. Katherine Tucker, associate professor of nutrition at the Friedman School of Nutrition Science and Policy, says the alcoholic beverage has high levels of an ingredient that enables the deposit of calcium and other minerals into bone tissue. Scientists point to silicon, which helps absorption of calcium and minerals to make strong bones. People with diets high in silicon, a mineral found in dark beer, had higher bone densities and therefore a lower chance of developing osteoporosis. Excessive drinking, however, can lead to a greater number of bone fractures.

FROM THE AMERICAN HEART ASSOCIATION:

Are there potential benefits of drinking wine or other alcoholic beverages?

Research is being done to find out what the apparent benefits of drinking wine or alcohol in some populations may be due to, including the role of antioxidants, an increase in HDL ("good") cholesterol or anti-clotting properties. Clinical trials of other antioxidants such as vitamin E have not shown any cardio-protective effect. Also, even if they were protective, antioxidants can be obtained from many fruits and vegetables, including red grape juice.

The best-known effect of alcohol is a small increase in HDL cholesterol. However, regular physical activity is another effective way to raise HDL cholesterol, and niacin can be prescribed to raise it to a greater degree. Alcohol or some substances such as resveratrol found in alcoholic beverages may prevent platelets in the blood from sticking together. That may reduce clot formation and reduce the risk of heart attack or stroke. (Aspirin may help reduce blood clotting in a similar way.) How alcohol or wine affects cardiovascular risk merits further research, but right now the American Heart Association does not recommend drinking wine or any other form of alcohol to gain these potential benefits. The AHA does recommend that to reduce your risk you should talk to your doctor about lowering your cholesterol and blood pressure, controlling your weight, getting enough physical activity and following a healthy diet. There is no scientific proof that drinking wine or any other alcoholic beverage can replace these conventional measures.