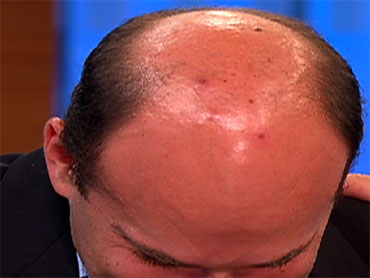 The spreading bedbug scourge hit close to home for "The Early Show."

One producer on assignment got them and was bitten so badly he wound up in the emergency room twice.

On the broadcast Tuesday, he ran down what happened.

Carl Leibowitz said he was in a Portland, Oregon hotel room Friday afternoon when he "started to get these like -- I felt like there were bites, and I was thinking I got a mosquito bite. And I just noticed there were three of them. And then later on, I started to notice, up by my shoulder, there were more bites. And I went out and got some Benadryl, took Benadryl, went to sleep, and then I woke up at 6:30 in the morning on Saturday and when I woke up, I'm like -- got bites all over me.

"And I turn on the light and my pillow is covered in blood. And when I looked down at the pillow, there's blood everywhere, I feel on my head there's all these bites, and I start to freak out. I don't know what happened to me."

Leibowitz headed for the emergency room. He says he had 43 bites in all, "all over my back, my shoulders, on my feet, all over my head."

Doctors there said they weren't sure "if it's an allergic reaction or if it's a bedbug bite. So they're not sure what it is. So they give me some Pregnisone and they told me just go home. I get on the plane, it's the most painful plane ride of my entire life, all the way back to New York City. Itching all over. The doctor said, 'Don't scratch, because if you scratch, you're gonna infect (the bites).' And all I feel like doing is scratching. I just wanna, like, tear my skin off."

Leibowitz went back to the ER when he got home because some of the bites were "starting to turn to blisters and there's pus. So I don't know what's going on."

The doctors refer to bedbug bites as "breakfast, lunch and dinner, Leibowitz explained, because they often pop up in clusters of three and, "Most of the bites on my body are all in threes."

CBS News Medical Correspondent Dr. Jennifer Ashton said two things Leibowitz said are "really important": No. 1: This is not subtle. This is not one isolated bite because, as disturbing as this image is, you have to remember, there will not be just one bed bug. There will be many bedbugs. And they do tend to bite in clusters of three. That's the first thing is -- there will be many. The second thing is they're painful. This isn't a little itch. They can really itch, and everyone's different in terms their reaction to any kind of bite … but they can be quite painful. So it's really not subtle."

The effects can come in psychological form, as well, co-anchor Harry Smith pointed out.

Leibowitz concurred, recalling that, "When they told me that this was bedbugs, they had me at the emergency room, had me attached to a blood pressure machine -- and my blood pressure just skyrocketed … and they were trying to bring it down, and they were, like, 'Relax!' and at this point I couldn't relax, because I was thinking, 'What do I have to throw away? And I'm thinking, 'It's all over my clothes, I have to throw my clothes away. I have to start throwing my suitcase away. What am I gonna do?' And they're telling me, 'You have to put them in an air-tight bag,' and I'm thinking, 'I don't know from air-tight bags!"'

When he went home, Leibowitz says, he "totally stripped naked … and ran into the shower."

Smith noted that the Environmental Protection Administration is warning homeowners not to use pesticides and other powerful chemicals meant for outdoors, inside.

"You don't want to take matters in your own hands," Ashton said, "as desperate as you feel. You only want to use pesticides that say they are for bedbugs. It's really important. A lot of them can be toxic. If they're toxic for the bedbugs, they can be toxic for children, pets and humans."