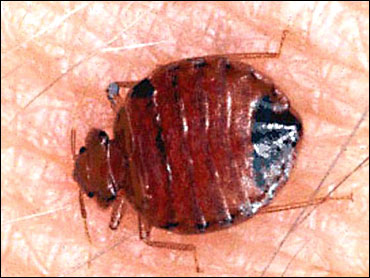 They creep quietly beneath bed sheets in the darkness of night, in search of a blood feast from an unsuspecting, slumbering host.

They engorge themselves with blood and disappear with the same stealth.

Once thought virtually eradicated in the United States, the bedbug is back.

"An insect is living beside you while you sleep, it withdraws three times its body weight in your blood, it's a psychological concern," said Frank Meek, national pest control technical manager for Orkin.

By the end of 2002, the little bloodsuckers had been reported in at least 28 states. And that could be just the start of a much larger problem.

"It's still at the beginning stages," Kansas State University entomologist Ludek Zurek said of the bedbug's return. "I'm predicting it's going to get worse. Nobody knows why it's coming back."

Some say an increase in international travel is to blame.

Mike Lawton, a staff entomologist with Western Exterminator Co. in Irvine, Calif., said people from countries where bedbugs are rampant are staying in U.S. hotels and motels, bringing the insects with them.

"They've (bedbugs) had an incredible impact on high-end hotels," he said. "You've got to keep it hush-hush. If the word 'bedbug' gets out, it scares a lot of people away."

Zurek said a majority of new cases reported in 2002 - 31 percent - were in hotels and motels. Of the remainder, 28 percent were in apartment complexes and dormitories; 25 percent were in single-family homes; and 16 percent were at other locations.

Bedbugs conceal themselves in mattresses, bedding, crevices in walls and floors, and even behind loose wallpaper. They are flat, wingless critters that are about the size of a small ladybug as adults, and they turn from pale brown to red brown after feasting. They don't carry diseases.

Bedbugs, which are classified as ectoparasites, have been increasingly found in residences - and that spells trouble.

While hotels and motels must tackle a bedbug problem immediately for their financial well-being, individuals might not initially recognize a bedbug infestation in their homes. Even after a person realizes there's a problem, he or she might not know how to fix it.

"Once they're brought in, you need to deal with them quickly," Lawton said. "Females can lay hundreds and hundreds of eggs. They go through their life cycle every 30 to 50 days, they stay hidden and are very hard to get to."

Barry Eldridge, president of The Bug Clinic in Spring Valley, N.Y., said people who thought bedbugs were just a fairy tale are finding out otherwise.

"It's not life or death, but it's a public health matter because people are getting bit, and over time, someone who doesn't recognize the problem can become quite ill," Eldridge said.

Zurek said the signs of bedbug infestation are hard to miss.

"Not everyone will be rushing to report it, but if people have them, they'll know because of the odor and the sheets will get dark and red because of the feces of the bedbugs," he said.

Bedbugs can live up to a year without a meal, they thrive in hot places and their bite usually is undetected until a person gets out of bed, Lawton said.

"They inject a chemical that numbs you," he said. "They feed on you and you don't even know it."

Zurek said bite marks usually show up as little red spots with a lighter red area around them. Unlike chigger bites that tend to be grouped in one area or pattern, bedbug bites can be all over a person.

Lawton said the best way to get rid of the pests is to hire an exterminator. He said over-the-counter spray insecticides only work if everything in a bedbug-infested room is taken apart and every tiny crack or crevice sprayed.

"Materials we use today don't last as long as they used to," Lawton said. "In the past when bedbugs were introduced to an area, the stuff used on cockroaches would do the trick. But we've switched to use a lot of baits for cockroach control, and that doesn't work on bedbugs."