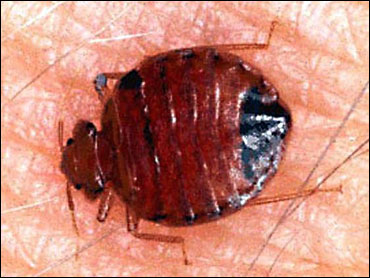 After waking up one night in sheets teeming with tiny bugs, Josh Benton couldn't sleep for months and kept a flashlight and can of Raid with him in bed.

"We were afraid to even tell people about it at first," Benton said of the bedbugs in his home. "It feels like maybe some way you're living is encouraging this, that you're living in a bad neighborhood or have a dirty apartment."

Absent from the U.S. for so long that some thought they were a myth, bedbugs are back. Entomologists and pest control professionals are reporting a dramatic increase in infestations throughout the country, and no one knows exactly why.

"It's no secret that bedbugs are making a comeback," said Dan Suiter, an associate professor of entomology at the University of Georgia.

Before World War II, bedbug infestations were common in the U.S., but they were virtually eradicated through improvements in hygiene and the widespread use of DDT in the 1940s and 1950s.

Bedbugs are tiny brownish, flattened insects that feed exclusively on the blood of animals and humans. Their bites may cause itchy red welts or swelling.

Unlike mosquitoes, though, they are not known to transmit blood-borne diseases from one victim to another. They are extremely resilient and very difficult to exterminate. Experts say bedbugs are not necessarily an indicator of unsanitary conditions.

In the past four years, reports of bedbugs have significantly increased in U.S. cities, from New York to Honolulu, especially in hotels, hospitals and college dormitories - all places with high resident turnover.

The National Pest Management Association, which represents many of the country's pest control companies, says the number of bedbug reports have increased fivefold in four years.

The Atlanta branch of pest-control firm Terminix saw no cases of bedbugs in 2004 and only three or four last year. But in the first six months of this year, they've had 23 new cases, said Clint Briscoe, a spokesman.

Experts are not entirely sure what has caused the marked increase. Some speculate that increased international travel and immigration may be partially to blame.

The tiny bugs may be hitching a ride in the luggage or clothing of travelers. This could explain the high concentration of the pests in cities like Atlanta and New York, which attract a lot of international traffic.

Another factor is a change in pest control practices. Companies are spraying more responsibly now, Suiter said. Instead of indiscriminately saturating the perimeter of all rooms, they often use more conservative measures and do large-scale spray treatments only when there's an infestation. As a result of consumer demand, less toxic chemicals are also being used.

"The bottom line is it may be a convergence of all those factors, but none of that really explains the rapid increase in recent years," said Michael Potter, a professor and urban entomologist at the University of Kentucky.

Experts agree that the public needs to be educated about bedbugs - on the symptoms and how to prevent them.

"A lot of people, including some physicians, don't even think they're real," Potter said. As a result people may go months before realizing the source of their discomfort.

In Hawaii, where tourism is a major industry, state lawmakers passed a resolution for a prevention campaign after infestations at some hotels damaged their reputations and annoyed travelers. Similarly, legislation for a bedbug task force has been proposed by New York City Councilwoman Gail Brewer.

For Benton, a 31-year-old graduate student, the bedbugs sparked a seven-month battle that included bug bombs and the tossing out of his and his fiancee's bedroom furniture.

They gave up and moved out of their apartment in New York and eventually moved back to their native Memphis, Tenn. Benton said the bugs essentially drove them out of New York because they couldn't sleep knowing the bugs may be anywhere.

"The main part of it is psychological trauma that they create because of the idea that they are feeding on you at night," Benton said. "It's still hard to talk about if it's anywhere near bedtime."

Bedbugs are flat and oval shaped and are a light reddish brown, though they're darker just after feeding. Adults grow to be about a quarter of an inch long. Bedbugs cannot fly, but they do crawl quickly. They are sometimes mistaken for ticks or small cockroaches.

What do they eat?

Blood from humans and animals. They are active mostly at night and hide during the day near where people sleep. Adult bedbugs can survive more than a year without eating.

How do I know if I have bedbugs?

If you awake with itchy red welts that weren't there the night before, you might have them. Other telltale signs are dark spotting from bedbug fecal matter on mattresses, box springs, bed frames and headboards, and spots of blood on sheets, mattress or walls.

How do you get rid of bedbugs?

Most experts say professional exterminators are required to thoroughly eliminate bedbugs, and several follow-up visits may be needed. The bugs cannot survive extended periods in temperatures below 32 degrees Fahrenheit or above 120 degrees Fahrenheit, so all bedding needs to be washing in water of at least 120 degrees or can be placed in a deep freeze, but the chilling period must be at least two weeks long.

How do I avoid getting bedbugs?

Secondhand furniture should be carefully examined for signs of bedbugs. Travelers should also check hotel beds and behind headboards thoroughly for signs, including pulling back bedding to check the mattress seams for small dark specks of bedbug fecal matter. When in a hotel room, place luggage on a rack, not the floor or furniture.