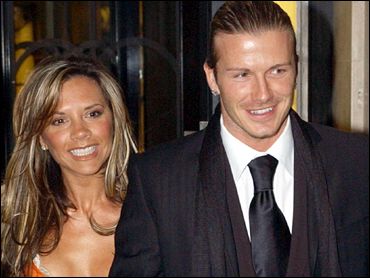 British soccer star David Beckham and his pop star wife Victoria are suing their former nanny for telling a tabloid newspaper that their marriage was on the rocks, a spokeswoman for the couple said Tuesday.

A story alleging the Beckhams were having marital troubles was published Sunday in the News of the World, which cited the couple's former nanny, Abbie Gibson.

Spokeswoman Jo Milloy said the Beckhams were suing Gibson, who quit her job earlier this month after working for the couple since October 2003, for breach of confidence.

Milloy said the Beckhams would also launch legal action against News of the World. The celebrity couple are already suing the newspaper over the publication last year of details of an alleged affair between David Beckham and his personal assistant Rebecca Loos.

"They will also be applying to the courts to amend their outstanding action commenced last year against the News of the World to include all of these issues by way of seeking aggravated damages," Milloy said.

On Saturday, the Beckhams attempted to get a court order barring the News of the World from publishing their former nanny's allegations.

Lawyers for the Beckhams argued that Gibson's contract included a promise not to speak about the couple's private lives.

But the paper said a High Court judge ruled in its favor on grounds that the story was in the public interest.

Spokeswoman for News of the World, Hayley Barlow, said the paper was surprised the Beckhams were launching legal proceedings in light of the judge's decision.

"The News of the World will vigorously defend any such action," Barlow said.