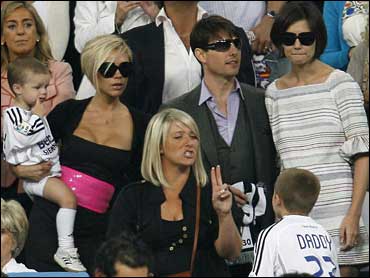 David Beckham was minutes away from a perfect Hollywood ending.

The 32-year-old soccer star-pop icon, who likely played his last game for a European club, was taken off the field moments before Real Madrid rallied to win the Spanish League title for the first time in Beckham's four years with the team.

The England midfielder was replaced in the 66th minute with what appeared to be a recurrence of an ankle injury. But he still managed to limp around the field in celebration in front of a huge crowd that included his wife, Victoria, and friends Tom Cruise and Katie Holmes after his team beat Mallorca 3-1 to win its 30th league title.

"I couldn't have dreamt it any better," Beckham said Sunday. "It's been about winning the title for the last six months and we've deserved it tonight."

It was the culmination of a season that can easily be called the most difficult of his life. But even being shunned by both Madrid coach Fabio Capello and England coach Steve McClaren over the last year didn't keep Beckham from proving he still has the skills to compete at the highest level.

"It's been an incredible experience, but all I remember now is the great things. Winning this tonight now puts to bed everything else," said Beckham, who was dropped from the Madrid lineup in January after signing a five-year, $32.5 million contract to play for the Los Angeles Galaxy of MLS.

But with Madrid again eliminated early from the Champions League and the team in fourth place in the league six points behind leader FC Barcelona, Capello begrudgingly recalled the former England captain.

"A major fault of mine this season was not recognizing Beckham's potential," Capello said Sunday.

Beckham's good looks and pop star wife Victoria have made him an international marketing magnet.

After the game, he did a lap of honor with an England flag draped across his back, soaking in the atmosphere at the famous Santiago Bernabeu stadium for one last time.

Instead of playing in front of 90,000 fans at Madrid and Barcelona, Beckham will turn out in front of about 8,000 people at some Major League Soccer games, even though his presence will inevitably boost attendance.

"David Beckham will have a greater impact on soccer in America than any athlete has ever had on a sport globally," Timothy J. Leiweke, president and CEO of AEG, owner of the Galaxy, said after the signing.