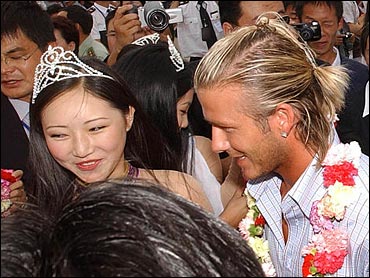 Soccer star David Beckham's unshaven face looks moodily out from ads in China for everything from cola to motor oil. His name sells soccer balls and athletic shoes.

And now, to the delight of Chinese fans, he's here.

Greeted by a cheering crowd and folk dancers with elephants, Beckham and his Real Madrid teammates arrived in China on Friday for an Asian tour that promises to make him an even bigger celebrity in a country where he already is a mini-industry.

"This is a great opportunity for him to take his popularity one step forward," said Terry Rhoads, a Shanghai-based sports marketing agent.

Beckham — known in Chinese as "Beikehanmu" — stars in ad campaigns for Pepsi, Adidas and Castrol Oil in China, where soccer is hugely popular. Tens of millions of fans follow 15 teams in the country's top league and dozens of smaller clubs.

"As long as Beckham's name is on a shirt, a bag, a ball, a pair of shoes, they'll sell in a blink of an eye," said Mi Jia, an employee in an Adidas store in the heart of Kunming, a city set in the lushly forested mountains in China's southwest.

On Friday, 400 fans in white Real Madrid T-shirts — some of whom had come from hundreds of miles away — lined the street outside their training camp. Musicians played traditional drums and cymbals.

Some players stopped to shake hands with fans. The media-shy Beckham, surrounded by a crush of photographers, gave only a slight smile and a few small waves.

Still, he drew sighs among female fans with his deep tan, unshaven look and blond ponytail.

"He's so handsome and he has so much class and breeding," said Deng Fang, 26, a tobacco factory employee and cheerleader for the Kunming soccer team.

"With him being here, his sponsors have the best chance to associate their brand with Beckham — the idol, the star," Kam said. "Beckham sells."

"He's got the looks, he's got the skill on the field, he's got a beautiful wife, he lives the celebrity lifestyle," Rhoads said. "He seems really well-grounded. He doesn't ever talk in arrogant terms about his opponents. He's humble ... and he's family-oriented."

Real Madrid paid Manchester United $40 million in transfer fees for Beckham about a month before the Asia tour.

Zhong Baohua, a shopkeeper in Kunming, was hoping to capitalize on Beckham's popularity.

After reading that he had switched from No. 7 to No. 23 when he joined Real Madrid, Zhong went to her wholesaler to stock up on jerseys with the new number.

There were none left. Other shopkeepers had beaten her to it.

"No matter how badly I wanted one, I couldn't get it," said Zhong, whose tiny store is filled with denim jeans.

At the entrance, a mannequin wears a lone Real Madrid jersey, but with No. 7, which belongs to Raul.

Zhong said with a frown: "Beckham's too popular. His number will sell out fast."