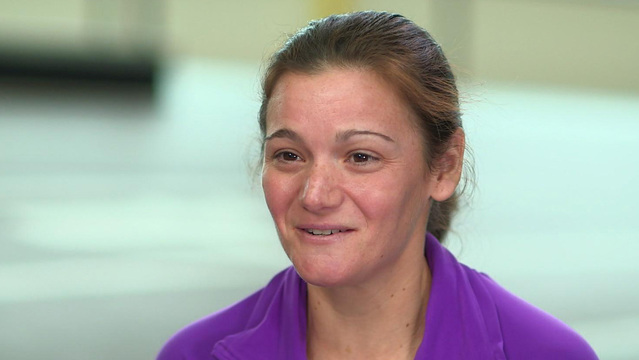 "We would go through customs and then go into the bathroom, come out of the bathroom in our running gear, ready to run," Pizzi said. "I felt like Superman."

Pizza said the challenge was 70 percent mental and 30 percent physical.

Britney Spears pleads for control of her life

Despite the mental grit, Pizzi never had a moment of doubt.

"There was never a time when I thought I cannot finish this. I was more of a 'how am I going to finish this?'" Pizzi said.

Eleven men and four women competed in the challenge. Pizzi - who stands at just five-foot-one - finished third overall. Her biggest inspiration is her daughter, Taylor.

"She came up to me one time and said, 'Mommy, finish strong.' And she was pulling for me. She was my number one fan," Pizzi said.

"It truly takes a village and a lot of the workouts were before Taylor wakes up in the morning or after she goes to bed," Pizzi said.

Since finishing the feat, Pizzi has received about 1,000 emails and plans on responding to all of them.

"Because people believed in me. And when people believe in you, people that you don't even know write these heartfelt emails, it means everything to me," Pizzi said.

That constant support from strangers was evident when Pizzi pulled a muscle in Dubai.

"The airline stewardess had switched out my ice package for me. Everybody was on board trying to help us. Everybody knew what we were doing and the bottles of water and - anything that was needed," Pizzi said.

By her final, seventh marathon, Pizzi was in a lot of pain, but she told herself she was not done "until you've actually finished."

"And when I crossed the finish line -- I had cried -- the last, from mile 25 to 26 -- just tears of joy. My boyfriend was holding the finish line tape. And I had got wrapped in an American flag. And it was one of the best days of my life," Pizza recalled.

Although she was only averaging 10 hours on each continent, her most memorable race was her first one - running on a glacier in Antarctica.

Showing off all her medals from the World Marathon Challenge, Pizzi said, "I'll have these forever."

The Massachusetts native now plans to run the Boston Marathon this April for the 16th time. Altogether, she's run 45 marathons, plus the seven of the World Marathon Challenge.

After finishing the world challenge, Pizzi returned home to a parade in her town.

"I got to ride on a fire truck and they named February 4th after me and signed autographs and it was so fun for the town. It was such a great, great day for the town," Pizzi said. "I felt like I triumphed. What an honor to represent our country and the amount of people that believed in me and told me I could do it - I learned how to be strong and just triumph through all odds against you."