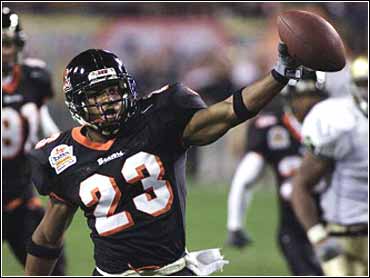 Oregon State's remarkable rise from pitiful to powerhouse is complete.

The brash, belligerent, fifth-ranked Beavers backed up their pregame boasts and then some Monday night in a 41-9 rout of Notre Dame in the Fiesta Bowl.

"We got our butt kicked," Notre Dame coach Bob Davie said. "We got outcoached, we got outplayed."

Oregon State, college football's laughingstock for more than a quarter-century, handed the 10th-ranked Fighting Irish their worst bowl defeat since a 40-6 loss to Nebraska in the 1973 Orange Bowl.

"What can you say?" Oregon State coach Dennis Erickson said. "We came out and played in all three phases about as well as we can play."

Jonathan Smith, the 5-foot-10 former walk-on who was mistaken for the team manager when Erickson first saw him, completed 16 of 24 passes for 305 yards and three touchdowns, then sat out the final quarter.

"Nerves played no part in it," Smith said. "We were more excited than nervous, and we were clicking from the start."

It was one of the most humiliating nights ever for college football's most storied program. Only a late touchdown against the Beavers' reserves prevented it from being the worst Notre Dame loss in 24 bowl appearances.

Had Oregon State (11-1) not committed a Fiesta Bowl and school record 18 penalties for 174 yards, it would have been even more one-sided as the plodding Irish (9-3) were no match for the speed of the hard-hitting Beavers.

"We had some dumb penalties," Erickson said, "but we're a very aggressive football team. That's just how we play and just how we are."

The Beavers, who in 1999 ended their NCAA-record streak of 28 consecutive losing seasons, had a 446-155 advantage in total yards and held Notre Dame to 17 yards rushing.

"If w can't run the football any more effectively than we did tonight, we have no chance," Davie said.

Oregon State linebacker Darnell Robinson, the defensive player of the game, forced a fumble and intercepted a pass to set up two touchdowns in the Beavers' 29-point third quarter.

"Their defense was on top of everything we were doing," Notre Dame running back Julius Jones said. "It's kind of hard to execute when they're calling out the plays we're going to run."

Chad Johnson caught touchdown passes of 74 and 4 yards, but he got away with a big mistake on the first one when officials didn't see him drop the ball two yards short of the goal line.

Notre Dame's 18-year-old freshman quarterback Matt LoVecchio, under extreme pressure most of the night, threw two interceptions and fumbled the ball away all in the third quarter. LoVecchio completed 13 of 33 passes for 138 yards. He was sacked six times.

LoVecchio, who was 7-0 as a starter going into the game, had thrown just one interception and Notre Dame had just eight turnovers tying an NCAA record through the regular season. The Irish had five turnovers against the Beavers.

The Irish, criticized for getting a Bowl Championship Series bid over teams ranked ahead of them in the BCS standings, lost their fifth consecutive bowl game.

Any doubts ended, though, with four touchdowns in a span of 7:10 in the third quarter.

Notre Dame forced the Beavers to punt for the first time, but LoVecchio fumbled on a blindside hit by Robinson. Eric Manning recovered for the Beavers at the Irish 26.

Two plays later, Smith lofted a perfect 23-yard scoring pass to T.J. Houshmandzadeh to make it 19-3 with 12:04 to play in the quarter. Notre Dame punted on its next possession.

Houshmandzadeh returned it up the middle to midfield, then fumbled. Teammate Terrell Roberts picked the ball up at the 45 and ran to the end zone. The two-point conversion pass from Smith to Robert Prescott put Oregon State up 27-3 with 9:08 to go in the third.

It got worse for LoVecchio, who threw a pass right into the hands of Robinson to give Oregon State the ball on the Irish 22. The Beavers scored in four plays, Smith throwing 4 yards to Johnson for the score and it was 34-3 with 7:02 left in the quarter.

The most interesting play was Johnson's long touchdown catch. He raced down the sidelines and casually dropped the ball as if he had crossed the goal line. But television replays clearly showed he was two yards shrt of the end zone.

No official saw it, though, and the touchdown put Oregon State up 12-0 with 4:18 to play in the half.

"I slowed down, not paying attention, and it's my fault," Johnson said. "I should've been focused on the game and not my celebration."

Consecutive sacks of LoVecchio pinned the Irish at thrid-and-31 on their own 2, but Oregon State free safety Calvin Carlyle was called for a personal foul for shoving a player after the play. Notre Dame got a first down, LoVecchio threw 40 yards to Javin Hunter and the Irish ended the half with Nick Setta's 29-yard field goal.

The Beavers drove to the Irish 15, 10 and 1 on their first three possessions but had to settle for field goals of 32 and 29 yards by Ryan Cesca to go up 6-0.

Oregon State drove from its own 11 to the Notre Dame 1 early in the second quarter but were stopped on fourth down. It was a momentary setback on a monumental night.

"I'm obviously embarrassed by the way we played, but I'll never be embarrassed of this football team," Davie said.