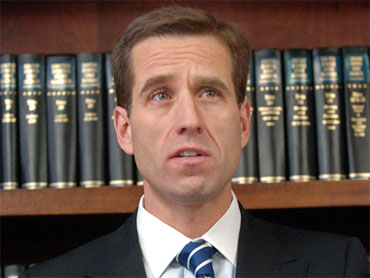 Beau Biden, Vice President Joe Biden's son and Delaware's state attorney general, announced on Monday that he will not be running for the U.S. Senate seat once held by his father.

After a weekend of confusion over whether he would run for the seat, Beau Biden sent an e-mail to supporters today saying he will seek re-election as attorney general instead of entering the Senate race.

"I have a duty to fulfill as attorney general, and the immediate need to focus on a case of great consequence. And that is what I must do," Biden, 40, wrote. "Therefore I cannot and will not run for the United States Senate in 2010. I will run for re-election as Attorney General."

Speculation carried on for months over whether Beau Biden would run for his father's seat, and an interview Joe Biden gave to the Wilmington News-Journal over the weekend raised new questions. The published interview suggested Joe Biden said his son would not run for the Senate, but the vice president's office disputed that interpretation, saying Mr. Biden was talking about Sen. Ted Kaufman, the former Biden Senate aide appointed to temporarily fill the seat, not Beau Biden.

Kaufman reiterated in a statement today his earlier commitment to not seek election to a full Senate term.

Before Beau Biden's announcement this morning that he is indeed not running for the Senate, CBS News chief political consultant, the Atlantic's Marc Ambinder, said that "Beau Biden's decision whether to run for Senate will be interpreted as a signal of whether the White House thinks that the tough political environment can be overcome by stellar candidates."

"As we saw in Massachusetts last week, voters clearly stated that these seats belong to the people – not to either political party or dynasty," NRSC spokesperson Colin Reed said. "Congressman Mike Castle has a proven record of independence and bipartisanship that puts him in a strong position to win this seat in November."

Joe Biden today commended his son for remaining committed to his duties as attorney general, in which he is currently involved in prosecuting a Delaware pediatrician charged with sexually assaulting several of his patients.

"I know I sound like the proud father I am, but all of his life, Beau has put duty above any personal ambition, and this decision today is another example of that exceptional character trait," Joe Biden said.