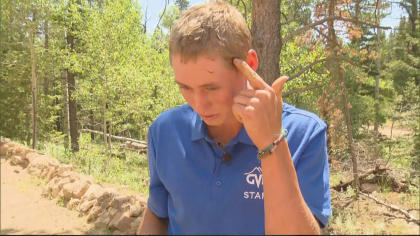 WARD, Colo. -- A bear believed to be the one that attacked a 19-year-old camp staffer has been trapped and killed by wildlife officers.

The bear was trapped at around 4:30 a.m. Monday at Glacier View Ranch, where the 19-year-old was attacked as he slept outside. The attack happened at about the same time the day before at the camp, located 48 miles northwest of Denver.

Colorado Parks and Wildlife spokeswoman Jennifer Churchill says the teen saw the captured bear and also believed it was the same one that bit him on the head.

"I never thought I would be attacked by a bear," the camper told CBS Denver. "I woke up to a crunching sound and a lot of pain… The bear had a hold of my head and was dragging me across the ground."

Dylan, who teaches wildlife survival skills to the campers at Glacier View Ranch, fought back with all of the strength he had.

"I just started hitting the bear as hard as I could, and I found its eye, and I started poking it with my fingers, and it dragged me for about 10 feet before I was able to get it off of me," he told CBS Denver.

Churchill recalled an attack in the 1970s in Colorado. The necropsy in that case found a plastic bucket in the bear's stomach, CBS Denver reports.

Black bears aren't usually aggressive but have attacked several people in the West in recent weeks.

Wildlife officials will use DNA to verify bear's identity and look at whether it was sick or injured, which might explain its unusual behavior.