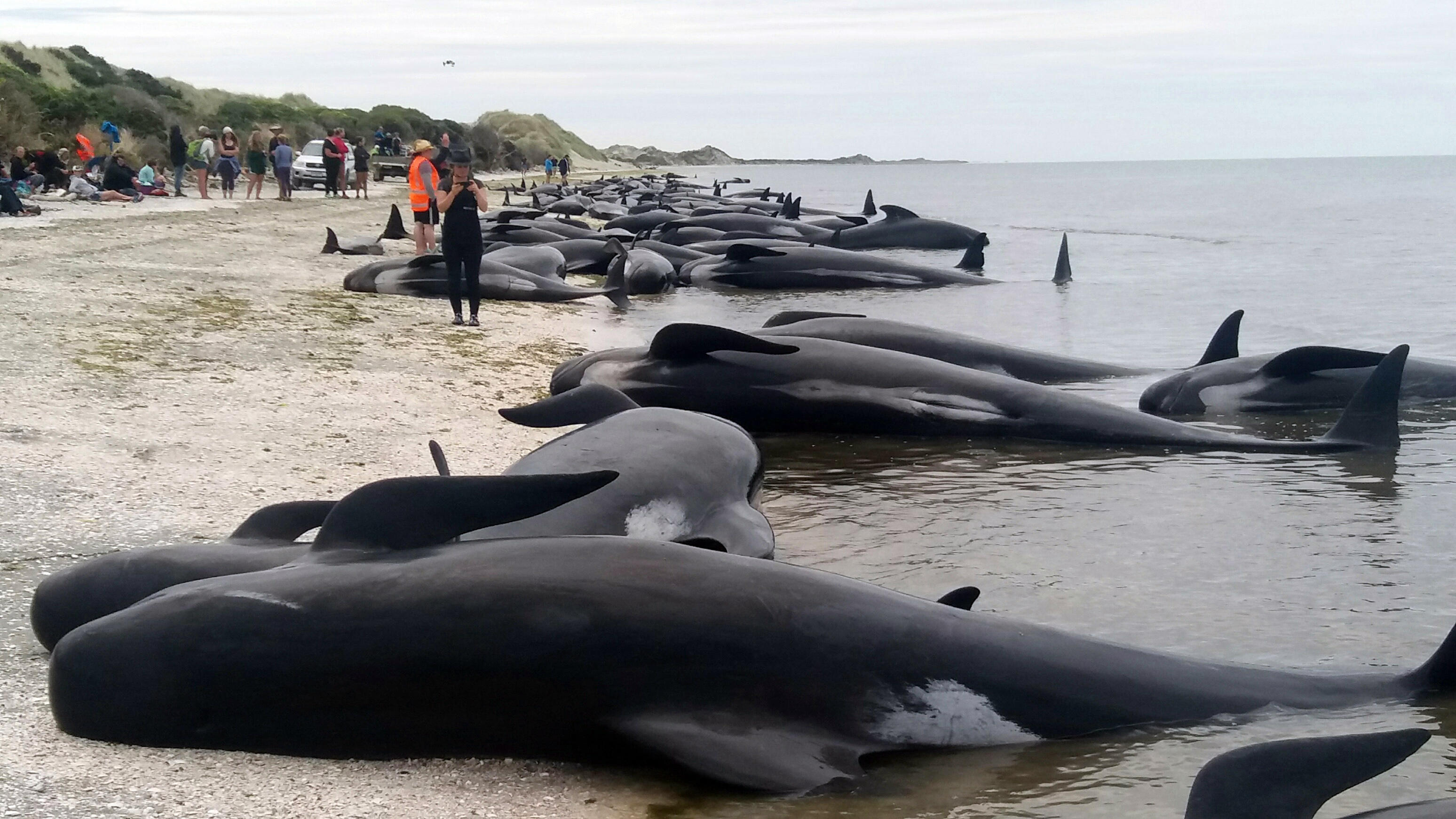 WELLINGTON, New Zealand -- New Zealand volunteers formed a human chain in the water at a remote beach on Friday as they raced to save dozens of whales after more than 400 of the creatures beached themselves in one of the worst whale strandings in the nation’s history.

About three-quarters of the pilot whales were already dead when they were found Friday morning at Farewell Spit at the tip of the South Island.

The adult and baby whale carcasses were strewn three or four deep in places for hundreds of yards, often rolled over on the sand with their tail fins still aloft.

Volunteers wearing wetsuits and carrying buckets worked to keep the stranded survivors alive in an area that seems to confuse whales and has been the site of previous mass strandings.

She said they had refloated some of the whales at high tide and had formed the chain to try and prevent them from swimming back ashore. Others remained alive but beached.

“It can be really quite distressing seeing so many dead whales,” Inwood said. “People need to be resilient and handle that and then get on with what needs to be done.”

She said volunteers were keeping the stranded survivors damp and cool by placing blankets over them and dousing them with buckets of water.

The high tide allowed volunteers their one shot of the day to help some of the whales. Should the whales become stranded again, the volunteers would have to wait until the next daylight high tide on Saturday.

Inwood said whale strandings occur most years at Farewell Spit, but that the scale of this stranding had come as a shock. She said farmers and other locals were helping out and that people were also arriving from other parts of the country.

There are different theories as to why whales strand themselves, from them chasing prey too far inshore to them trying to protect a sick member of the group.

Farewell Spit is sometimes described as a whale trap. It has a long protruding coastline and gently sloping beaches that seem to make it difficult for whales to navigate away from once they get close.

Authorities were asking for fit volunteers to travel to the beach and help with the rescue efforts. Getting there from the nearest provincial airport in Nelson involves a three-hour drive followed by a 15-minute hike.

Conservation workers said many of the surviving whales were likely to be in bad shape given the number of deaths, and that their conditions would likely deteriorate.

Volunteer rescue group Project Jonah said a total of 416 whales had stranded and 75 percent were dead when they were discovered. The Department of Conservation put the number of dead whales at about 250 to 300.

New Zealand has one of the highest rates of whale strandings in the world, and Friday’s event is the nation’s third-biggest recorded stranding.