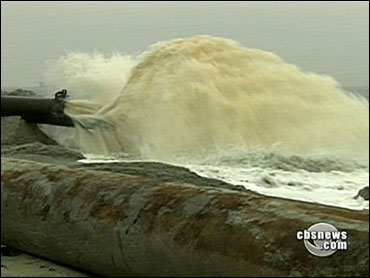 How would you feel if the federal government dumped piles of cash into the ocean?

According to a new report, that's essentially what happens every time it replenishes coastal beaches: the sand - and your tax dollars - quickly wash away, as CBS News correspondent Sharyl Attkisson reports.

It's a vicious cycle. Mother Nature erodes our beaches. Man tries to put them back by pumping in tons of sand.

It's called "beach renourishment." Advocates say it keeps tourism alive and makes a powerful buffer to save houses and lives during storms. It's also very popular among wealthy owners of beach property.

But a new Congressional report obtained by CBS News claims beach renourishment is nothing but a big waste of your tax dollars.

The government's own ocean scientists at The National Oceanic and Atmospheric Administration say the new sand "often disappears rapidly, does not prevent erosion and remains vulnerable to loss from [storms]." Other experts estimate nourished beaches disappear two to 12 times faster than natural ones.

Yet Congress has dumped $3 billion over the years into the projects. Meantime, more important priorities go unfunded. $3 billion would've been more than enough to fix and update the nearly 1,000 federal levees at risk of failing.

Asked how it is that levees are not getting funding while the beach renourishment projects are, Sen. Coburn responded, "The powerful force of lobbying."

When it comes to the powerful force of beach lobbying, nobody beats Howard Marlowe, nicknamed "the sand man."

Marlowe has convinced Congress to give more federal tax dollars to his beach town clients than any other lobbyist.

"Sand provides the best protection against the waves that come from storms," he said.

We asked him to answer some of his critics' basic objections.

Attkisson: The benefits are often only temporary.

Attkisson: Some of the beaches are renourished over and over again.

Take one of Marlowe's clients, Cape May Point, N.J. Along with the rest of the Cape, there have been at least 24 renourishments there, with more on the way.

Asked if he feels there is any limit to what should be spent on trying to save beaches, Marlowe replied, "We're only at $100 million a year."

He says that twice that is needed. Sen. Coburn says it's money thrown to the wind: "Natural beach erosion, you can't stop."

Stopping federal funding could prove just as difficult. When Congress commits to a beach, they'll spend however much of your money it takes to try to put back what Mother Nature takes.