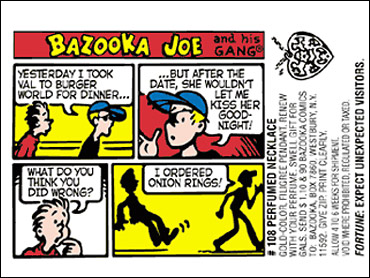 The little pink bricks, the corny comics, the eye-patch, the mail order loot and the snarky fortunes are items that can only be associated with Bazooka Joe.

As The Early Show Correspondent Melinda Murphy found out, the symbol of eternal youth celebrated a big birthday this year. He's 50.

Jeff Shepherd is barely half that, but he's quite the historian just the same.

"In the first series, they issued these introductory comics, like, 'Hi my name's Janet. Bazooka Joe is my boyfriend,'" Shepherd says.

Shepherd guesses he's got 100,000 comics, which might be the largest collection of Bazooka Joe stuff in the world – 50 years worth.

Bazooka Joe had an eye patch, but it was just a marketing scheme, according to Shepherd.

It's a scheme that's working today.

"Over the years, it's been shipped to over 100 different countries and it has been translated into over 50 different languages," Topps' brand manager Gail Sirota says. "We sell about a half a billion pieces a year, which is a tremendous quantity of gum."

Children still love the gum, which is why some kids recently got on stage in New York to compete for a chance to be featured in a Bazooka Joe comic. A little loot could also have helped inspired the little ones to go to the auditions. Bazooka Joe was offering a $5,000 savings bond for the lucky child to be chosen

"I could do a lot with that," says nine-year-old contestant Nicole Simke.

In the end, Josh Kay was named the biggest wise-cracking kid.

But Josh's face won't be the only thing that's supposed to be new in Bazooka comics next year.

It won't be Bazooka's first facelift. It's all done to keep Joe popular with today's kids.

But for Shepherd, it's the old stuff that he treasures. He says he enjoys the original art for the comics.

In the late '50s, if a person collected a large number of bazooka comics, they could be rewarded items such as a bike. Shepherd doesn't have a bike, but he 's got an old microphone, a little microscope and even a cowboy boot ring. Prizes today are a bit more current.

Collecting may be fun, but in the end, nothing beats blowing an old-fashioned bubble.

To ask Jeff Shepherd a questions about Bazooka Joe, email him at jeffshep77@hotmail.com.