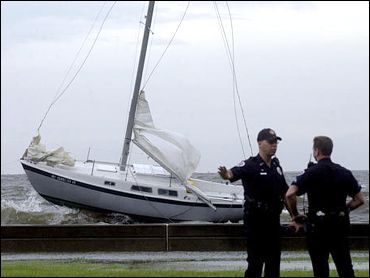 Tropical Storm Bill headed for the Gulf Coast with wind and heavy rain Monday, and emergency officials braced for the threat of flooding across already saturated southern Louisiana.

Some floodgates were closed and residents were urged to evacuate one barrier island.

The National Hurricane Center in Miami issued a hurricane watch for the Louisiana coast. The storm had sustained winds of about 60 mph but forecasters said that wind could speed up to 74 mph, or hurricane strength, by the time Bill's eye made landfall later Monday.

Local officials said they were doing everything they can to minimize flooding.

"Canals have been pumped down to their lowest possible level in anticipation of this additional heavy rainfall," said suburban Jefferson Parish president Tim Coulon.

Some flooding, however, is inevitable in the below-sea-level region.

By late morning, the heaviest rain appeared to be falling in the area of Pascagoula, Miss., where 6 to 8 inches was expected, the National Weather Service said. Heavy rain also started creeping into coastal areas of southern Louisiana and had spread into Alabama. Six to 8 inches of rain was likely in the New Orleans metropolitan area, the weather service said.

"Certainly, it's not as dangerous as other storms we've had, but it is a dangerous storm," Jim Ballow, assistant chief of operations for the Louisiana Office of Emergency Preparedness, said Monday.

Ballow said the ground in the New Orleans area already was largely saturated by rain over the past two weeks that had been heavy enough to cause street flooding.

A voluntary evacuation was recommended Monday for the Louisiana barrier island town of Grand Isle, which has only one flood-prone highway in and out for its 1,500 residents.

However, "when they issue voluntary evacuation, there really isn't much movement," said Lawrence Brewer, owner of a lock shop in Grand Isle. "I don't see a car going down the highway."

The sea was already marked by whitecaps by late morning at Holly Beach, La., but the rain hadn't started yet, said Cleo Primo, owner of vacation cabins.

Tropical storm warnings were in effect from High Island, Texas, to Pascagoula, Miss. Warnings mean tropical storm conditions are expected in the area, generally within 24 hours.

At 11 a.m. EDT, the storm was centered 50 miles south-southwest of Morgan City and moving north at about 14 mph, forecasters said. Tropical storm-force wind extended out 145 miles.

The year's first tropical storm, Ana, formed in the open Atlantic in April and was a threat only to shipping. Systems become tropical storms when their sustained wind exceeds 39 mph.

Bill formed just after the 46th anniversary of Hurricane Audrey, one of the most destructive June hurricanes to hit the United States. It struck the Louisiana-Texas coast on June 27, 1957, with a 13.9-foot storm tide and wind gusting to 180 mph. It killed at least 390 people and estimates run to more than 500.