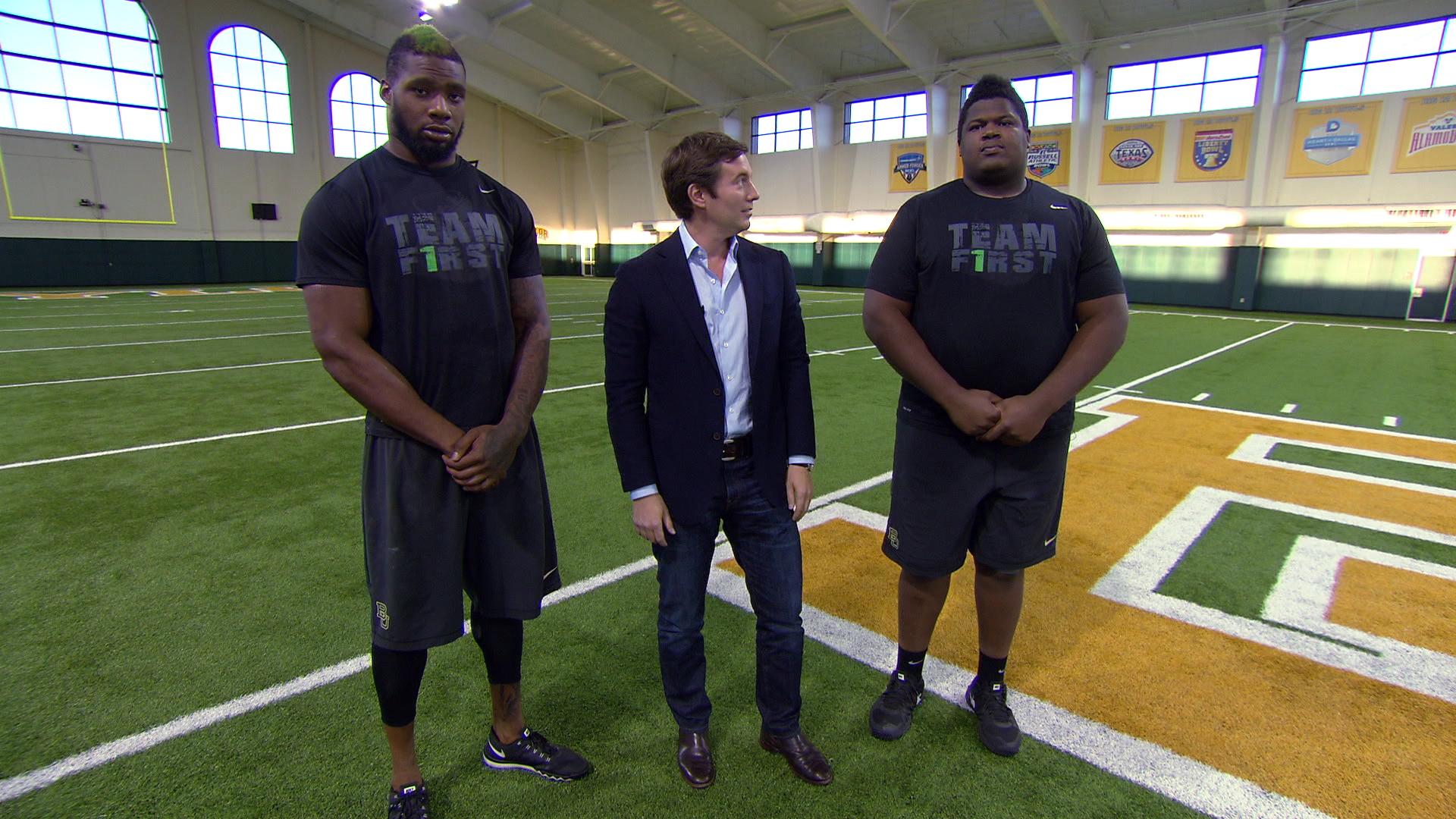 WACO, Texas --Watch the Baylor University football field for a minute and it doesn't take long for two towering talents to stand out: seniors LaQuan McGowan and Shawn Oakman.

"You're talking about Oakie-Doke and LaQuan. I mean, they are abnormal. But I mean abnormal in a great way," Baylor football coach Art Briles told CBS News correspondent Jeff Glor.

McGowan is a 6-foot-7, 400-plus pound offensive lineman-turned-tight end, who first turned heads in last season's Cotton Bowl when he rumbled for this touchdown.

Before the coin toss of the same game, his teammate, 6-foot-9 defensive end Oakman, loomed over the opposition and inspired a series of Internet memes about his superior stature.

"I've been doing it 37 years, never had people like this," Briles said.

He said players like them don't exist right now except at Baylor, which ranks sixth in college football playoffs.

CBS News met both men on Baylor's campus where McGowan commutes in his used Ford Taurus.

McGowan is bigger than the car.

"I don't know where that name came from," McGowan said.

McGowan is a gentle giant who actively tries to be smaller, even if that means being uncomfortable. He is a size 20 for shoes, but he wears size 18.

"It hurts, but I want to be fast. So I wear lighter shoes," he said.

Oakman is fast and more combustible. Potentially a very high pick in next year's NFL draft, he talks constantly about dominance.

But he's also dealt with demons.

After a rough childhood outside Philadelphia, he was recruited by Penn State, but dismissed from the squad. This year he had to sit out of the first game at Baylor. He's been warned by the NCAA not to roll up his jersey during games.

But Oakman denies he got in trouble.

"What don't they get?" Glor asked.

"The politics of it. The NCAA rules. You got a bunch of guys that run our program that never played football. ... How you tell a kid he can't play with swag? Can't roll up his jersey?" Oakman said.

"Yeah, but they're rules," Glor pointed out.

"Exactly, for what, those rules are made for, to do what? To prevent individuality," Oakman said.

Oakman has publicly apologized for his dismissal at Penn State but still says his individuality can't be contained.

It's not clear Baylor wants it to be.

Briles' team is a collection of overflowing talent on the verge of breaking through.

"We really don't feel like we've accomplished anything," Briles said.

So what will it take for the team to feel like they're on the map?

"You know, we wanna win another Big 12 championship. You know, that's a big, big deal for us. And then get into college football players and win a national championship. I mean, that's pretty simple. That's how we operate," Briles said.

And that means pitting mountains of men against each other all the time, in games and in practice.

Baylor is also suddenly dealing with a big challenge. Starting quarterback and Heisman trophy candidate Seth Russell was hurt in the team's last game. So Baylor will now start a true freshman at quarterback as they try to win a national championship.

FLOTUS to COVID victims: "You are not alone"

Why school shootings should be considered a "top" homeland security threat