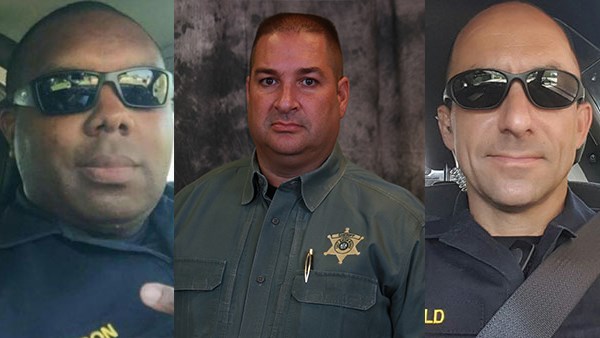 BATON ROUGE -- An East Baton Rouge sheriff's deputy slain in what police call an ambush Sunday was attempting to save a wounded officer when he was fatally shot by the gunman, East Baton Rouge Parish Sheriff Sid J. Gautreaux said at a press conference Monday.

Surveillance video shows Deputy Brad Garafola moving towards a Baton Rouge police officer who was crawling after being shot by gunman Gavin Eugene Long when Long opened fire on Garafola, Gautreaux said. Garafola had been taking cover from gunfire behind a dumpster when he saw the wounded officer come around a corner and tried to get to him.

Garafola engaged the gunman amidst a hail of bullets, Gautreaux said.

"My deputy went down fighting," Gautreaux said during the emotional press conference. "He returned fire until the very end."

After Long killed Garafola, according to Gautreaux, Long went back to the wounded officer the deputy had been trying to save and fired two more shots, killing him.

The deadly shooting in already-tense Baton Rouge killed three police officers and wounded three more early Sunday morning, as tensions over policing remain high in cities across the nation. The rampage followed the fatal police shooting of Alton Sterling, which along with the police shooting of Minnesota man Philando Castile sparked nationwide protests.

Police say 29-year-old Long, a former Marine from Kansas City, was wearing all black and carrying a rifle when officers first encountered him at about 8:40 a.m. Shots were reported fired two minutes later, and the first report of an officer down came in two minutes after that.

By 8:50, Long had been killed, along with deputy Garofola and two Baton Rouge police officers. Law enforcement who spoke Monday said Long was killed by a Baton Rouge Police Department SWAT team from more than 100 yards away, and said they're convinced Long would have continued the rampage targeting police officers otherwise.

"This guy was going to another location - he was not going to stop here," Baton Rouge Police Chief Carl Dabadie said. "I have no doubt he was headed to our headquarters and he was going to take lives."

The gunman was moving in on two other deputies when the SWAT team fired, officials said.

Dabadie said police have been questioned about militarized tactics, but said these killings show that "we are up against a force that is not playing by the rules."

Edmonson showed overhead maps of the area to explain how Gavin Long snuck up behind police officers and shot them at close range. Police released disturbing surveillance images of Long stalking the officers carrying a long gun slung over his shoulder with a strap. Edmonson said Long's movements showed tactical strategy and were chilling in their brutality.

"There's no doubt whatsoever these officers were intentionally targeted and assassinated in a calculated attack against those who work to protect this community every single day," Edmonson said.

Before the rampage, according to Gautreaux, Long approached a police vehicle with his long gun pointed, as though he were ready to fire on someone inside, but found it empty. He then shot and killed a Baton Rouge police officer and shot and wounded another officer before killing Deputy Garofola and the second Baton Rouge cop.

Edmonson said another deputy, Nicholas Tullier, had spotted the gunman's car and was about to run his license plate when the gunman shot and critically wounded him. The deputy was shot in the head and the stomach, Gautreaux said. Gautreaux said the officer was in "very, very critical condition" and was on a ventilator.

Deputy Bruce Simmons is being treated at Baton Rouge General Hospital for wounds to his arm and shoulder that are not expected to be life-threatening. A third Baton Rouge police officer who had been listed in fair condition was released Monday.

Police said they believed Long had been in Baton Rouge for several days before the rampage. Louisiana Gov. John Bel Edwards said Long "came in here from somewhere else to do harm to our community."

He called the slayings "a diabolical attack on the very fabric of our society."

A military source tells CBS News that Long left the Marines in 2010 with an honorable discharge. His final Marine rank was E-5 (sergeant).

Law enforcement sources tell CBS News that Long used the pseudonym of Cosmo Setepenra. He posted at least one video on YouTube about oppression and police protests. Long described his new name in a document he filed in May 2015 with the Recorder of Deeds Office in Jackson County, Missouri. The filing also declared membership in a separatist group that considers itself beyond the reach of state and federal laws.

Officials described the officers and deputies as heroes and Gautreaux said they ran "to the threat, not from the threat."

Neighbors remembered slain deputy Garafola, 45, as a family man. Rhonda Smith said Sunday evening that Garafola was never seen without at least one of his four children, who range in age from 7 to 21.

Dabadie read a statement from Jackson's wife, who described him a a dedicated husband and father, "my everything."

"He made the ultimate sacrifice and paid the ultimate price in doing what he loved - protecting and serving a city that he loved," the statement read. Dabadie also read from a Facebook post Jackson made days before the rampage that's been widely shared on social media.

As both a black man and a police officer, Jackson wrote that he received "nasty, hateful looks" while in uniform, and out of uniform "some consider me a threat." But he said he believed the city "must and will" get better and urged, "Please don't let hate infect your heart."

Dabadie said he had served a Jackson's instructor at the police academy and that he trained him for 20 weeks, testing him "physically, mentally and emotionally every day."

"He never wavered, he never quit in his service to this community," Dabadie said.

Days before Jackson's death, Dabadie said he went to visit with third district officers including Jackson to "lift their spirits." Instead, he said, Jackson ended up "giving me a pep talk."

"That was the last time I spoke to Montrell and I'll never forget it," he said.