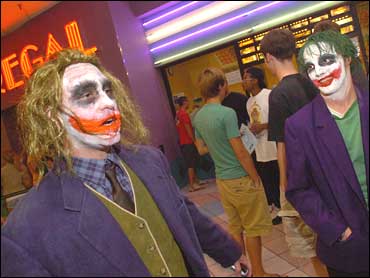 Batman's joust with the Joker has set another box-office record.

Stoked by fan fever over the manic performance of the late Heath Ledger as the Joker, "The Dark Knight" set a one-day box-office record with $66.4 million on opening day, Warner Bros. head of distribution Dan Fellman said Saturday.

"I think they're in jeopardy," Fellman said of the "Spider-Man 3" record.

"The Dark Knight" began with a record $18.5 million from midnight screenings, topping the previous high of $16.9 million for "Star Wars: Episode III - The Revenge of the Sith."

The opening day grosses for "The Dark Knight" far exceeded the full weekend haul of its predecessor "Batman Begins," which took in $48.7 million in its first three days in 2005.

Reviews were excellent for director Christopher Nolan's "Batman Begins," but they were stellar for his "Dark Knight."

"We've really never seen anything like this," said Paul Dergarabedian, president of box-office tracker Media By Numbers. "The death of a fine actor taken in his prime, a legendary performance, and a movie that lives up to all the hype. That all combined to create these record-breaking numbers."

Buzz had been high for the Batman sequel well before Ledger died of an accidental prescription-drug overdose in January. Trailers last fall revealing Ledger's demented Joker, with his crooked-clown makeup, turned up the heat even more.

His death and the critical acclaim over his performance that built from advance screenings left fans in a frenzy for the film.

"It's a combination of things. Certainly, that's a great part of it, but I think this movie's gross was partly because of the reviews it received and the incredible buzz and word of mouth that preceded it with our early screenings," Fellman said. "And the success and quality of the last one, 'Batman Begins,' delivered by Chris Nolan just set the tone for the opening of this movie."

But some critics caution that, despite the flick's PG-13 rating, it's too dark for young kids, CBS News correspondent Michelle Miller pointed out on The Early Show Saturday.

No matter - movie-goers coming out of one Manhattan theater raved to Miller about "The Dark Knight," with many saying they fully intend to see it again, and again, and again!

And, on The Early Show Saturday, Los Angeles Times columnist Tom O'Neil called "The Dark Knight" a "great thrill ride," and remarked, "It's one of the most perfect Batmans."

He said Ledger's performance resulted in "one of the creepiest villains we're ever seen," and "because he died tragically, it takes it to a whole, other eerie level."

The film spins an epic crime duel as Ledger's Joker orchestrates a reign of terror on the city of Gotham aimed to spread chaos and break down the restraint that keeps Batman on the right side of the law.

While critics are taking the film seriously enough to suggest Ledger could be in line for an Academy Award nomination, the action-packed movie also delivers as pure summer-movie escapism.

"If you're worried about mortgage payments and gas prices, when you're sitting in 'The Dark Knight' for two and a half hours, you're not thinking about any of that stuff," Dergarabedian said.