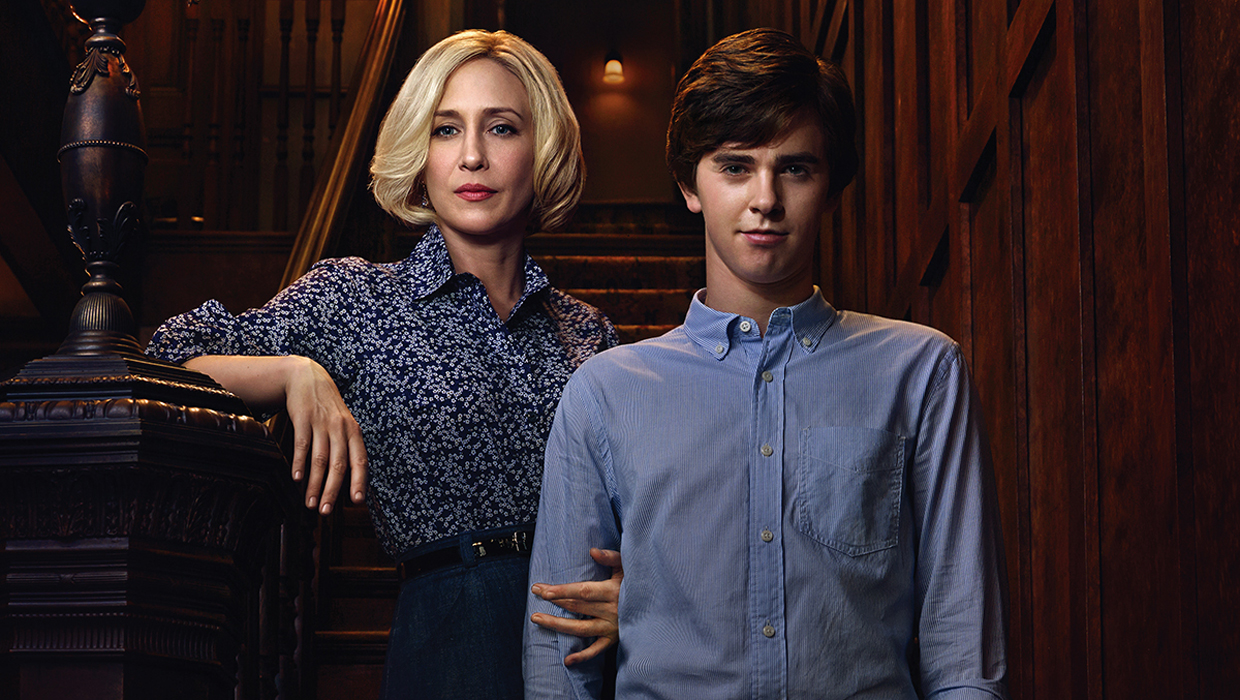 Things are getting tense in White Pine Bay as "Bates Motel" gets closer and closer to its second season finale -- and showrunner Carlton Cuse ("Lost") promises there are more big twists to come.

"The octane goes way up for the last three hours," the executive producer told CBS News. "The last two hours are my favorite of the whole season. I think in a way, as a storyteller, you try to make the ride entertaining but the end of the season is always great because you get to take the characters to another place and that's what we try to do in these last [episodes]."

With just three episodes left to go this season (the first of which airs Monday night on A&E), Cuse hinted at what's to come, detailed the deepening rift in Norman (Freddie Highmore) and Norma's (Vera Farmiga) relationship and also spoke about his new "badass" FX vampire series, "The Strain."

[Warning: Spoilers below if you're not up to date on "Bates Motel."]

CBS News: We're three episodes away from the season finale. Where do things go from here?

Carlton Cuse: I think the big question for Norman this year has been how much he's going to learn about the darker side of himself. There's this issue of, is he going to discover what he's capable of doing when he has these blackout states, and that's something which is really interesting and has really profound ramifications for the character. And there's also this whole drug war situation heating up to a very fevered pitch, and it might have some very dire consequences.

Norman is trying to understand who he is and what he's capable of, and it's caused a rift between him and Norma. Will we see that escalate?

These two people are kind of closer to each other than to any other two people in the world, and I think the idea that Norman begins to realize his mother is not being totally candid with him or is keeping something from him -- this is a rift that he's never experienced with her before. It's profound, and it completely upends the way he thought about their relationship. And I think Norma believes she's doing the right thing, protecting Norman from himself, but she doesn't really realize what the consequences of that will be for her relationship with him. And there's nothing that matters more to Norma in the entire world than her relationship with Norman.

It was interesting seeing Norman so distraught over killing Cody's dad, when the audience knows what he'll grow up to be and what he's capable of doing.

The interesting thing, and one of the things ["Bates" executive producer] Kerry Ehrin and I tried to do this season is really make you very involved in both Norma and Norman's stories and their life situations. It's really interesting, I think, that the show subverts a lot of expectations that you think it might be -- when you think about the label of the show, you think, "Oh, maybe this is a show about a dude who's killing guests at this motel and he's just kind of an evil guy." But we really care deeply about Norma and Norman as writers and we want the audience to feel the same way. I mean, Norman doesn't really do a lot that's bad this season! What happens with Cody's dad is truly an accident, but it becomes a mechanism by which he starts to learn about himself in a new way.

Norman's also now been linked to his teacher Blaire Watson's death. What does that mean for him?

I don't want to spoil anything, but it all comes together at the end of the season. It all folds together, I hope, in a satisfying way. It's all very satisfying for us.

What about Dylan and the White Pine Bay drug war? The stakes are getting higher there, too.

The drug war is heating up enormously. Nick Ford is this very malevolent guy -- he didn't get to be the head of one of the drug families in this town without being ruthless and relentless. He's wants what he wants and that's going to have really significant consequences for Dylan, Norman and Norma. I feel like that story really kicks into another gear in these last three episodes.

"Bates Motel" got renewed recently. Have you already begun thinking about season 3?

Yeah. Kerry Ehrin and I, we're kind of in the fun, initial [stages] -- we have an overall plan for where the show is going but now that we have our renewal, we're talking though what part of that plan we're going to execute for season 3. It's the really fun part of the season as a writer, where you're working out the architecture of what the season is going to be and I'm actually really excited about it. We have some ideas that I think are really fantastic and open up the characters and the world of White Pine Bay in a brand new way. It's hard to say too much about it until you've seen the rest of the episodes for this season, but spinning out of the last three, we've got some really cool stuff to do.

Can we expect to see any more big twists before this season ends?

I would say we would be very remiss as storytellers if there weren't some big twists coming, particularly on our show. The octane goes way up for the last three hours. The last two hours are my favorite of the whole season. I think in a way, as a storyteller, you try to make the ride entertaining but the end of the season is always great because you get to take the characters to another place and that's what we try to do in these last two hours.

You're also also working on "The Strain," which premieres on FX in July.

What interested me about doing "The Strain" was that Guillermo Del Toro and Chuck Hogan's three books, upon which [the series] based, were a completely different take on the vampire story. I wouldn't want to do another version of glittery, romantic brooding vampires, but I felt like there was a chance here to upend the vampire genre and tell a completely different type of vampire story with a completely different set of expectations. These vampires are really scary, and it's also this wonderful sort of urban tale about how New York society is upended by this strain of vampires that overrun the city. And the way that happens and unfolds is really interesting. We have a wonderful cast led by Cory Stoll of "House of Cards" and David Bradley from the "Harry Potter" movies and I like to think of it as a thriller with wonderful horror elements. I just think it's pretty gripping and badass.

"Bates Motel" airs Mondays at 10 p.m. ET on A&E. Watch a trailer for the second season's final three episodes below: