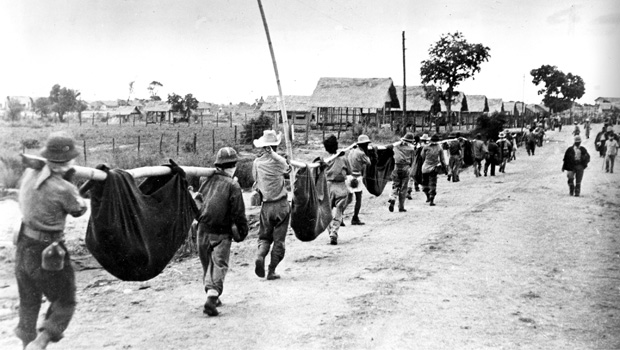 ALBUQUERQUE, New Mexico - John E. Love, a Bataan Death March survivor who led a campaign to change the caption on a historic photo from The Associated Press, has died. He was 91.

As a 19-year-old member of the New Mexico Guard, Love was one of 75,000 Filipino and American soldiers who were taken captive by the Japanese in World War II when the U.S. forces surrendered in the province of Bataan and Corregidor Island in April 1942.

In all, tens of thousands of troops were forced to march to Japanese prison camps in what became known as the Bataan Death March. Many were denied food, water and medical care, and those who collapsed during the scorching journey through Philippine jungles were shot or bayoneted.

"I was one of the first 300 or 400 off the march to enter Camp O'Donnell, and they (prisoners) began dying that same day," Love told the Albuquerque Journal in a 2009 interview. He estimated he carried more than 1,000 bodies to the graveyard.

For the remainder of the war, Love was forced to work in a Japanese copper mine until being liberated in 1945.

After the war, he enrolled at the University of New Mexico and graduated in 1950. He worked at Conoco Inc., for 35 years and lived in El Paso, Fort Worth, Houston and Arlington, Texas, with his wife, Laura Bernice Ellis, who died in 2000.

In 2009, Love joined a campaign with other Bataan Death March survivors to change the caption on one of the most famous photos in AP's library about the march. The photo, thought to be of the Bataan Death March, actually was an Allied POW burial detail.

Following a six-month investigation, The AP corrected the caption in 2010, 65 years after the image was first published. AP archivists confirmed Love's account of the burial detail at a prisoner-of-war camp in the weeks that followed the Death March.

When Love learned of the caption revision in March 2010, he became emotional with a reporter.