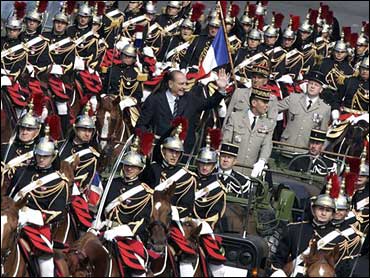 Soldiers from 13 African countries that are celebrating five decades of independence marched down the Champs-Elysees ahead of French troops. African leaders watched from the stands.

President Nicolas Sarkozy rode down the avenue in an open military vehicle. His wife, singer Carla Bruni-Sarkozy, watched from the stands and later signed autographs. A downpour drenched troops and the crowd during part of the parade.

Another traditional Bastille Day event, the lavish garden party at the presidential palace, was canceled as France's government, like those around Europe, tries to rein in runaway debt. Skipping the party saved about $992,000, government spokesman Luc Chatel said.

The holiday marks the July 14, 1789, storming of the Bastille prison in Paris by angry crowds, which helped spark the French Revolution.

The invitation of African leaders forced Sarkozy to defend himself from critics. A host of associations protested about alleged human rights violations by some of the African leaders and said Sarkozy was glorifying the "Francafrique," the French nickname for what many see as cronyism between France and its former African colonies.

During a lunch with African leaders Tuesday, Sarkozy insisted the invitation was not an "expression of colonial nostalgia, or a French temptation to take over your independence celebrations."

Sarkozy said he wanted to celebrate historic bonds and "build the future together."

He also said the government would submit a draft law to ensure that veterans from France's former colonies are entitled to the same sums in pension payments as their French counterparts- a long-standing source of tension.
AP: