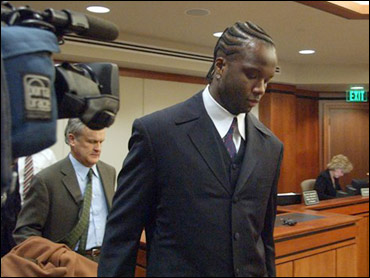 Five Indiana Pacers players and three fans charged in one of the most violent melees in NBA history appeared in court Tuesday — each at a separate hearing — and were released on bond.

The Pacers players, charged with misdemeanor assault and battery in the brawl with Detroit fans at The Palace of Auburn Hills, appeared for about three minutes each before District Judge Lisa Asadoorian.

Asadoorian allowed each of the players to leave the state and barred them from the Palace "except for employment-related purposes." Ron Artest, Stephen Jackson, Anthony Johnson, David Harrison and Jermaine O'Neal also were told they must attend the next hearing in the case, scheduled for April.

David Wallace, brother of Detroit Pistons center Ben Wallace, who also has been charged, was not in court Tuesday, but his attorney appeared on his behalf, said Oakland County Assistant Prosecutor Paul Walton.

Bryant Jackson, a spectator at the Nov. 19 game, is charged with felonious assault for allegedly tossing a chair. He was ordered to stand trial following a preliminary examination that also took place Tuesday in Asadoorian's courtroom.

Jackson's attorney, Kenneth Karasick, argued that no witnesses who were at the Palace the night of the brawl could positively identify Jackson as the chair thrower. But Asadoorian ruled that videotape and witness testimony were sufficient.

The fight among spectators and players broke out near the end of the game after an on-court dispute over a foul.

Although no one expects jail time for the players, many have already lost millions of dollars in salary and endorsements, reports CBS News Correspondent Trish Regan.

Fan Bryant Jackson is charged with felonious assault for allegedly tossing a chair. His preliminary examination scheduled for Tuesday morning was delayed when his lawyer claimed that prosecutors provided him with a copy of the brawl video that was blank.

On Monday, a spectator who police say was punched by two players during the fight pleaded no contest to violating a local ordinance that prohibits fans from entering the basketball court during an NBA game. The spectator, Charlie Haddad, 21, is scheduled to be sentenced March 16.

He is concerned the league will have difficulty rebounding from this black eye.

"It's not good for players to be brawling with the people who are paying their salaries," Lanza said. "It's a mistake."