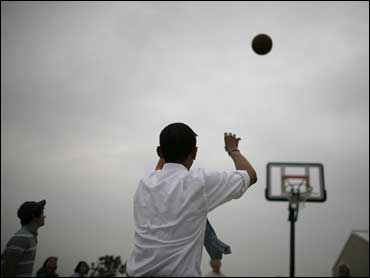 Confined to the bench back in his high school basketball days, Barack Obama felt the fierce urgency of now.

The scrappy "Obomber," nicknamed for his jump shot, wanted playing time for himself and the other reserves. At a team meeting, Obama confronted his coach, a man who could be fiery and intimidating.

Obama had a flashy style the coach, Chris McLachlin, didn't fully appreciate, a game he described as "streetball, get after it, the defense doesn't know what's coming."

"He could've played and started on any other team in the state. He was that good. We just happened to have just a team that was pretty loaded," McLachlin said.

As a result, Obama found himself stuck behind a couple of veteran forwards. Punahou School would win the state championship 60-28, with Obama scoring only two points.

Thirty years later, as the presidential campaign went into motion, another team stocked with veterans stepped up to compete. Obama resolved to stay off the bench, and his hard-charging ways paid off with victory in the race for the Democratic presidential nomination.

Basketball has been an important part of Obama's life, from his island childhood to his years at Harvard Law School. Even today, he brings to the presidential contest qualities that teammates and other old friends remember seeing on the court.

"I could play basketball, with a consuming passion that would always exceed my limited talent," Obama wrote in his memoir.

On a playground under the sweltering sun, "Barry" found refuge and identity. The pudgy boy of mixed race - his mother a white woman from Kansas, his father a black man from Kenya - spent hours alone, working on his jumper, crossover dribble and other moves. With his maternal grandmother watching from her 10th-floor bedroom window, he would shoot hoops into the night.

"At least on the basketball court I could find a community of sorts, with an inner life all its own," Obama wrote. "It was there that I would make my closest white friends, on turf where blackness couldn't be a disadvantage."

He also used the sport to connect with the father he longed to know. The elder Barack Obama left Hawaii when his son was 2. When he returned eight years later for a brief Christmastime visit, he gave his son a basketball. In a rare photo of the two together, Obama and his father stand in front of a Christmas tree with the orange ball.

"Obviously, that visit meant a lot to him and had a profound impact," said Maya Soetoro-Ng, Obama's sister. "After all, that was the only real images he had of his father, that he experienced firsthand. You can imagine a boy coming of age, that such an encounter would be of vital importance."

On the sprawling campus of the prestigious Punahou School, Obama could often be seen carrying books in one hand and dribbling a basketball in the other. He eventually earned a spot on the heralded varsity team.

"He'd be the first one to practice, and after practice, he'd go to the park and play more," said McLachlin, who is the father of PGA Tour golfer Parker McLachlin. "So his passion for the game is unmatched by most of the players I've ever had."

Starting center Dan Hale, the youngest member of the championship team, remembers Obama as a tough competitor who wasn't into talking trash.

"If he did, he would always cap it with a smile," Hale said. "So there was never an edge to it in that sense. But if two guys were tied up with the ball, he's not going to back down. He was a guy that would get in there and fight for it."

Obama was frustrated at times but stuck with the team's goals, his teammates recalled. "A lot of times, he didn't agree with coach. He sucked it up," said teammate Alan Lum. "A lot of times he did question, in respect. It wasn't anything negative. Perseverance is what he learned, because he really had to be a total team player."

The team's music was Obama's responsibility. Players grooved to the sounds of Earth, Wind and Fire and idolized the moves of pro star Dr. J, Julius Erving, whose picture hung on Obama's bedroom wall.

"I truly believe the way someone plays basketball definitely gives you a sense of who they are in their character," said Harper, now an actor who is raising money for Obama's campaign.

Michelle Obama may believe that as well. When she began dating Obama, she asked her brother, Craig Robinson, to test her new boyfriend on the court. Robinson, a former hoops star at Princeton and Oregon State's newly hired coach, reported back that Obama was confident and unselfish.

Today, Obama manages to squeeze in games occasionally, including on the morning of his big opening win in the Iowa caucuses.

"He really feels the game brings him back to a place where he can be completely himself and he can relax," said his sister. "He can recline into a gentler past, if you will."

Before the New Hampshire primary, Robinson helped set up 3-on-3 tournaments tied to a voter registration drive. In late April, Obama played in front of cameras in hoops-crazed Indiana. Four days later, in North Carolina, he scrimmaged with the beloved Tar Heels.

Obama said Sunday he'd like to put a court in the White House.

Referring to his disastrous attempt at bowling before Pennsylvania's Democratic primary in April, Obama said: "I hear there's a bowling alley (in the White House) and obviously that hasn't gone too well. So we're getting rid of the bowling alley and replacing it with a basketball court."

Obama's high school teammates say they recognize many of the moves on display in recent footage of Obama playing hoops, even if his mini-afro and several pounds of body weight are long gone.

"Could I take him?" Hale asked. "Definitely. He might get me in full court, though. I don't run up and down as fast as I used to."