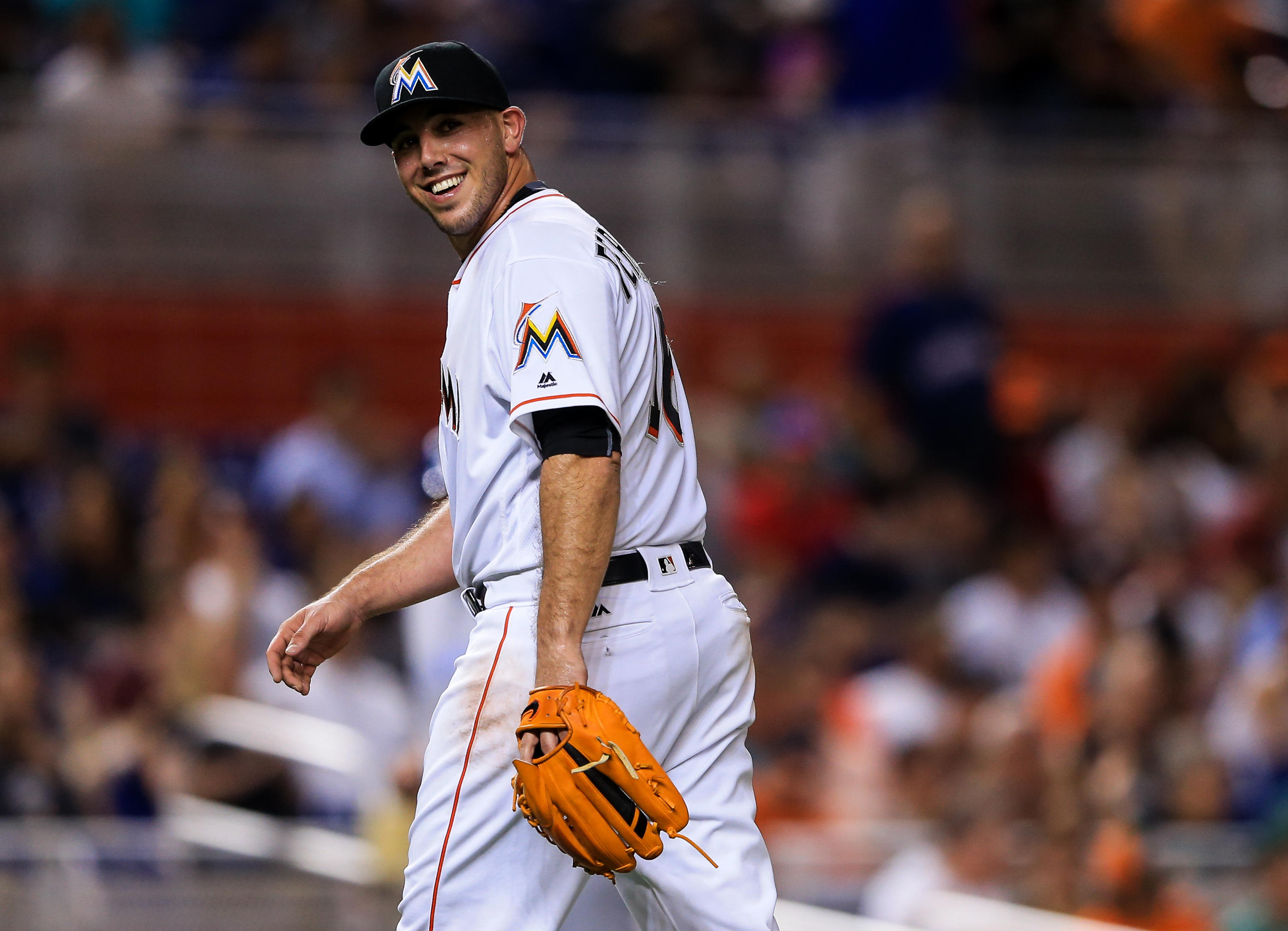 MIAMI -- Miami Marlins players have gathered at the team’s ballpark to grieve together following the death of teammate Jose Fernandez.

The 24-year-old pitcher and two of his friends were killed when their boat smashed into a jetty off Miami Beach early today. Authorities say the 32-foot boat was demolished when it hit the rocks at full speed.

Hall of Famer Tony Perez, a Marlins executive and fellow native of Cuba,” said “all I can do is scream in disbelief,” adding that he feels as if he lost a son.

Fernandez escaped from Cuba by boat on his fourth try as a teenager, and when his mother fell into the Yucatan Channel during the journey, he jumped in and pulled her out.

Fernandez and two other people died when their 32-foot vessel slammed into a jetty off Miami Beach, authorities said.

CBS Miami reported the other two in the boat with the 24-year-old Fernandez ranged in age from 24 to 27.

Authorities didn’t know the time of the crash. The capsized boat was found shortly after 3 a.m.

Major League Baseball released a statement saying it was “stunned and devastated.”

“He was one of our game’s great young stars who made a dramatic impact on and off the field since his debut in 2013,” Commissioner Rob Manfred said. “Our thoughts and prayers are with his family, the Miami Marlins organization and all of the people he touched in his life.”

The Marlins’ game Sunday at home against the Atlanta Braves was canceled. The Braves, along with several other teams, quickly offered condolences.

“Hands down one of my favorite guys to watch pitch! He brought nothing but intensity and passion,” Boston Red Sox pitcher David Price tweeted.

Within hours after the news broke, Marlins players gathered at the ballpark to grieve together.

Samson spoke at the news conference while surrounded by every player on the Marlins, except their ace. The players wore team jerseys -- black ones. Pitcher David Phelps stared at the floor and shook his head, while outfielder Christian Yelich took a deep breath and exhaled slowly. Their eyes were red.

“I’m still waiting to wake up from this nightmare,” Stanton said. “I lost my brother today and can’t quite comprehend it. The shock is overwhelming. What he meant to me, our team, the city of Miami, Cuba & everyone else in the world that his enthusiasm/heart has touched can never be replaced. I can’t fathom what his family is going through because We, as his extended Family are a wreck.”

Fernandez was on a vessel that hit a jetty near a harbor entrance, said Lorenzo Veloz of the Florida Fish and Wildlife Conservation Commission. The overturned boat remained in the water for several hours, its engines partially submerged as its nose pointed skyward, and debris from the crash was scattered over some of the large jagged rocks.

Veloz described the condition of the boat as “horrible.”

City of Miami Fire-Rescue workers were seen carrying bodies, draped and on stretchers, at the Coast Guard station after sunrise. They were taken to the medical examiner’s office. Two bodies were found under the vessel and a third was found on the jetty.

The names of the other two victims were withheld pending notification of relatives, the Coast Guard said. One of them was the son of a Miami-Dade police detective, the police department said.

“It does appear that speed was involved due to the impact and the severity of it,” Veloz said. “It does appear to be that they were coming at full speed when they encountered the jetty, and the accident happened.”

Fernandez died from trauma and not drowning, Veloz said, who added there was no immediate indication that alcohol or drugs were a cause in the crash. He said none of the three victims wore a life jacket.

The boat was owned by a friend of Fernandez.

“It does pertain to a friend of Jose who is very well connected with several Marlins players, and I have stopped that boat before for safety inspections with other Marlins players on board,” Veloz said. “We know that this boat knows the area. We just can’t answer why this happened.”

Marlins owner Jeffrey Loria was out of town but planned to fly to Miami.

“Sadly, the brightest lights are often the ones that extinguish the fastest,” Loria said in a statement. “Jose left us far too soon, but his memory will endure in all of us. At this difficult time, our prayers are with his mother, grandmother, family and friends.”

A native of Santa Clara, Cuba, Fernandez was unsuccessful in his first three attempts to defect, and spent several months in prison. At 15, he and his mother finally made it to Mexico, and were reunited in Tampa, Florida, with his father, who had escaped from Cuba two years earlier.

The Marlins drafted him in 2011 and Fernandez was in the majors two years later at 20. He went 38-17 in his four seasons with Miami, winning the NL’s Rookie of the Year award in 2013, and was twice an All-Star.

Many players and MLB officials and fans took to social media to express sadness at Fernandez’s passing.

Last week, Fernandez posted a photo of his girlfriend sporting a “baby bump” on his Instagram page, announcing that the couple was expecting its first child.

“I’m so glad you came into my life,” Fernandez wrote in that post. “I’m ready for where this journey is gonna take us together.”

Fernandez became a U.S. citizen last year and was enormously popular in Miami thanks to his success and exuberant flair. When he wasn’t pitching, he would hang over the dugout railing as the team’s lead cheerleader.

“When I think about Josie, it’s going to be thinking about a little kid,” said Mattingly, pausing repeatedly to compose himself. “I see such a little boy in him ... the way he played. ... Kids play Little League, that’s the joy Jose played with.”

Mattingly then wiped away tears, and he wasn’t alone. Retiring Red Sox star David Ortiz asked the Tampa Bay Rays to cancel a pregame tribute they scheduled in his honor before his final game in their ballpark Sunday.

“I don’t have the words to describe the pain I feel,” Ortiz said.

The New York Mets, in the thick of a playoff chase, will begin a series in Miami on Monday. Fernandez’s debut game in 2013 was against the Mets, and he was scheduled to face them Monday after having his start pushed back a day.

“When the first pitch left his hand, the first thought is, ‘Oh, wow, this is something special,’” said Mets manager Terry Collins, who picked Fernandez for this year’s All-Star Game. “This was not only one of the greatest pitchers in the modern game but one of the finest young men you’d ever meet, who played the game with passion and fun and enjoyed being out there.”

The game Monday will be played as scheduled, the Marlins said.

“Deep in our hearts there is a lot of pain,” Miami third baseman Martin Prado said. “Somehow we’ve got to overcome that.”

Fernandez’s death immediately brought memories of past baseball tragedies, such as the deaths of Thurman Munson and Roberto Clemente -- stars who died in plane crashes in the 1970s.

Cleveland teammates Steve Olin and Tim Crews were killed in a boating accident in Florida in 1993, and the game also reeled from the sudden deaths of major leaguers Darryl Kile, Nick Adenhart, Lyman Bostock and Cory Lidle in recent years.

Video boards at Marlins Park on Sunday morning showed a large “16” -- Fernandez’s uniform number -- over his name. The number was also painted on the mound, and flowers rested on the rubber. A few dozen fans milled about in the ballpark plaza, some wearing Fernandez jerseys.

There were pregame tributes and moments of silence for Fernandez across the majors. His jersey hung in the Mets’ dugout as they played Philadelphia at Citi Field.

Fernandez’s 76th and final game was Tuesday, when he pitched eight shutout innings, struck out 12 and beat the Washington Nationals 1-0.

“He told one of his teammates that the last game he pitched, against the Nationals, was the best game he ever pitched,” Prado said, his voice breaking. “Now he’s gone, and it’s hard.”