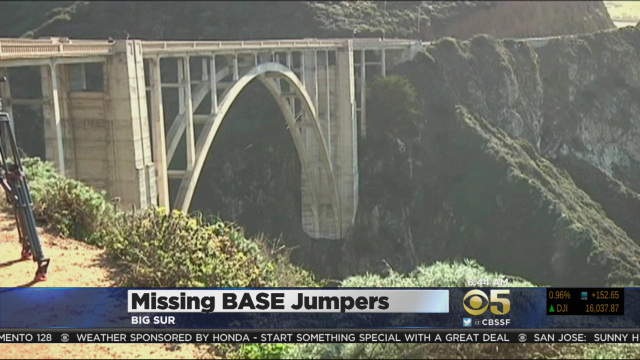 BIG SUR, California - A thrill-seeker who parachuted off a California bridge overlooking the Pacific likely drowned, as did the man who jumped in to try to save her, authorities said.

CBS affiliate KION-TV reports that the two BASE jumpers -- an acronym for parachuting off buildings, antennas, spans and Earth -- were discovered to have been missing on Saturday morning, although the jump is thought to have occurred days earlier.

Monterey County Sheriff's officials said Monday that a video from a helmet camera shows Mary Katherine "Katie" Connell, of Ventura, descending roughly 300 feet and landing on Bixby Creek, which feeds into the Pacific. Shortly after the landing, large waves overtake her.

"As the water retreats back into the ocean, Connell and the parachute are not seen retreating back to shore," Bernal said.

Sheriff Steve Bernal says her companion then jumped off the bridge to try to save her. His name and both their ages have not been released.

Bernal says the man likely took off his helmet and parachute to try to rescue her; that's where the footage ends.

Deputies didn't learn about the jumpers until Saturday afternoon when inspecting an abandoned rental car. A parachute and helmet were found partially buried on the beach.

Deputies looked up the car renter's name and discovered he had an extensive background in BASE jumping and skydiving. Bernal said Connell is an experienced skydiver with more than 300 jumps. Little was released about the man except that he is from Finland. Investigators believe they jumped Wednesday morning.

Jackie Faust, general manager of Skydive Monterey Bay in Marina, said while skydiving and BASE jumping are similar, there isn't much overlap in the communities. She said BASE jumping can be more dangerous and isn't regulated like skydiving.

"(BASE jumpers) don't have two parachutes, they have one, and it's completely different equipment," she said.

Jumping off Bixby Bridge can be especially dangerous because of the ocean and the relatively quick drop, Faust said.