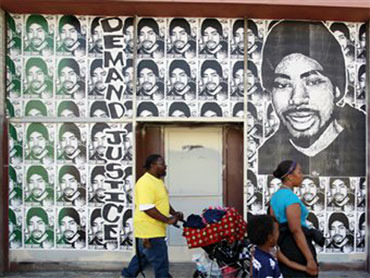 LOS ANGELES (KPIX) A jury has convicted a former Bay Area Rapid Transit police officer of involuntary manslaughter in the shooting death of an unarmed man on an Oakland train platform.

Involuntary manslaughter typically carries a sentence of two to four years. Sentencing was set for Aug. 6.

Mehserle was placed in handcuffs and taken away after the verdict. He turned to his family and mouthed, "I love you, guys." His parents wept when the verdict was read.

One female juror wiped tears with a tissue when the panel was polled on its decision.

At least five bystanders had videotaped the shooting incident - one of the most racially polarizing cases in California since four Los Angeles officers were acquitted in 1992 in the beating of Rodney King. Mehserle is white, Grant was black.

Prosecutors said the 28-year-old Mehserle became angry at Grant for resisting arrest. Mehserle claimed he mistakenly drew his handgun instead of his Taser stun gun.

The trial was moved to Los Angeles from Oakland due to racial tensions and extensive media coverage.

The jury consisting of eight women and four men, none of them black, only deliberated for six hours over two days before delivering their decision. The jury had a choice between second-degree murder and lesser charges of voluntary and involuntary manslaughter.

The verdict followed a three-week trial in which prosecutors played the videos taken by bystanders, and witnesses recounted hearing the frightening gunshot that killed Grant.

The case was a rare instance in which a police officer stood trial for an on-duty killing.

Alameda County District Attorney Nancy O'Malley indicated that she was "disappointed and frustrated," because "this was not the verdict we sought."

"This case is a tragedy in every respect, and Oscar Grant should never have been killed at the hands of a sworn officer," she added.

John Burris, an attorney and spokesman for Grant's family, said outside the L.A. courthouse that the family was also "extremely disappointed" in the involuntary manslaughter verdict, adding it "is not a true representation of what happened."

Burris contended that Mehserle should have been convicted of murder, saying it was like Mehserle "ran a light instead of killing someone."

Grant's family has filed multimillion dollar lawsuits against BART. Only the mother of Grant's daughter has reached a settlement.

In Oakland, at the "Behind the Scenes" salon at 17th and Broadway, hairdressers along with patrons gasped out loud when the verdict was read.

"It's just outraging that they would attempt to appease the public instead of deliberating a real verdict," said Wayne Shelley, a stylist.

A crowd of people gathered near Oakland City Hall let out a chorus of moans and profanity when they heard the verdict.

Many in the loose group of about 100 people believed the verdict of involuntary manslaughter was too light. About a dozen people formed in a semi-circle to pray, and others appeared stunned and hugged one another.

"It's not real, it's not real. Where's the justice? He was killed in cold blood," said Amber Royal, 23, of Oakland.

Police in Oakland expected protests after the verdict and officers in riot gear were visible on the streets as about 400 people marched through downtown around 5:30 p.m. BART trains were packed with people are leaving the city.

Gov. Arnold Schwarzenegger issued a statement urging Californians to remain calm and not resort to violence. He also informed Oakland Mayor Ron Dellums that the state was well prepared to assist in maintaining order.

Dellums encouraged the community to "express...grief in a healthy manner that will not endanger our safety, livelihood or reputation as a city."

"We are asking for the community to come together, look out for one another and stay safe," a statement issued by Dellums said. "We will not tolerate destruction or violence. We live here, and we love Oakland."

Merchants all along Oakland's 17th Street were tense. Almost every store front near the intersection of 17th and Webster was boarded up, including some whose owners had said just last week that they weren't going to succumb to the fear.

A huge traffic jam formed on Broadway near Oakland City Hall as activists with red t-shirts reading "I am Oscar Grant" marched with purpose.

The crowds came after many businesses and public agencies in the area sent employees home for the day after word came in that a verdict had been reached.

Noah Klein was one of the passengers trying to get on a BART train at the 12th Street/Oakland City Center station.

Klein works in the Elihu M. Harris State Building in downtown Oakland, and was told to go home early after word came in that a verdict had been reached.

"It was a mob almost," he said. "It wasn't rushing or angry or trying to push, but everyone was trying to make their way down to a train."