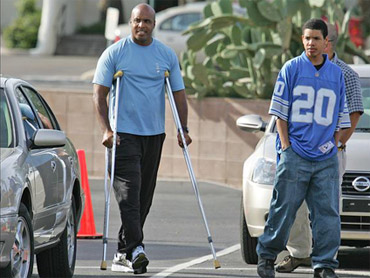 The son of baseball home run king Barry Bonds is facing legal troubles of his own after police say he was arrested over the weekend during an argument with his mother.

Menlo Park police say 19-year-old Nikolai Bonds was booked on suspicion of assault with a deadly weapon, vandalism and other charges at the home of his mother, Sun Bonds, around 10 a.m. Saturday.

Police spokeswoman Nicole Acker says Nikolai Bonds was taken into custody after allegedly throwing a door knob at his 45-year-old mother. The younger Bonds also allegedly smashed pictures and vases, causing about $400 worth of damage.

He was released Saturday night after posting $50,000 bail. It was not known if he had retained an attorney.

Sun and Barry Bonds were divorced in 1994.