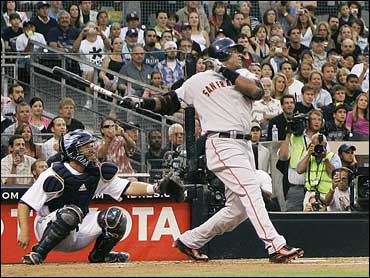 Barry Bonds swung, took a half-dozen steps and clapped his hands. With no trace of a smile but a strong shot for all the doubters, he caught Hank Aaron and tied the career home run record Saturday night.

No. 755 sailed 382 feet into the left-center bleachers, moving Bonds level with Hammerin' Hank and within one swing of having baseball's most coveted record all to himself.

"The hard part is over right now," Bonds said.

"This is the hardest thing I've had to do in my entire career," he said. "I had rashes on my head, I felt like I was getting sick at times."

High above the field in a private box, Major League Baseball commissioner Bud Selig was a reluctant witness to history. Choosing to overlook the steroid allegations that have dogged Bonds, Selig watched with hands stuffed in pockets and nary a cheer on his lips.

"No matter what anybody thinks of the controversy surrounding this event, Mr. Bonds' achievement is noteworthy and remarkable," Selig said in a statement.

Selig said either he or a representative would attend the Giants' next few games "out of respect for the tradition of the game, the magnitude of the record and the fact that all citizens in this country are innocent until proven guilty."

Aaron was not in attendance. The Hall of Famer is not following the chase in person.

"We as baseball players, especially as African-American ballplayers, have so much respect for Hank Aaron and all our fellow African-American athletes as well. They have paved the road for what we're doing now," Bonds said.

Bonds' homer drew a mixed reaction from the San Diego crowd. Several fans held up asterisk signs — believing Bonds' record should be considered conditional — and the San Francisco slugger was booed as he headed to left field at the end of the inning.

"I want to thank the fans. They have been outstanding," Bonds said. "It's been a fun ride. I really appreciate the way San Diego handled it and the way their fans handled it."

Bonds walked his next three times up and left the game in the eighth for a pinch-runner. He raised his helmet with his left hand, then his right, and drew a standing ovation from many fans who chanted his name.

Bonds will not start on Sunday, saving his attempt to break the record until a series of home games starting on Monday.

Earlier in the day, Alex Rodriguez hit his 500th home run, and both men donated their helmets to the Hall of Fame.

The fan lucky enough to catch the Bonds ball — expected to fetch seven figures at auction — was 33-year-old Adam Hughes, who was whisked to a secure area so the specially marked ball could be authenticated.

After Bonds crossed the plate, he lifted his batboy son, Nikolai, and carried him in an embrace, then kissed 8-year-old daughter Aisha and wife, Liz.

Only two other games were being played on the west coast when Bonds connected. The news was met with scattered boos at those games in Los Angeles and Seattle.

"He is probably the best hitter since Babe Ruth, but that's my opinion. The things he's done, the records he's broken. He's stood out amongst the players of today and been way above them, head and shoulders above them for his career," he said.

The godson of Willie Mays and the son of an All-Star outfielder, Bonds seemed destined for greatness from the start. But his speed drew more attention than his strength when he broke into the majors as a leadoff hitter.

Even when Bonds became a threat to Aaron's record, many fans thought age would slow him down. Instead, his power numbers surged — as did speculation about steroid use.

Bonds denied that he knowingly used performance-enhancing drugs and let the allegations bounce off him, the same way fastballs deflected off his bulky body armor.

He has remained beloved in the Bay Area through all the off-field issues, refusals to sign autographs and his surly behavior.

Bonds broke the single-season homer record with 73 in 2001. Ever since, he's been on a path toward Aaron, a journey that hasn't been full of joy. Bonds has been hobbled by bad knees and bickered with Giants management, and his chase was hardly backed by Selig.

The commissioner is a close friend of Aaron's, who began and ended his career in Selig's native Milwaukee.

A lot of fans, in fact, are already rooting for the day when Bonds' record falls. Rodriguez is considered the most likely successor. The Yankees star just turned 32 and is well ahead of Bonds' pace at the same age.

Even with Bonds at 755, there is bound to be a split among fans over who is the real home run champ.

There will be some who always consider Babe Ruth as the greatest, while others will give that honor to Aaron, who was respected for his quiet dignity when he broke Ruth's record in 1974.