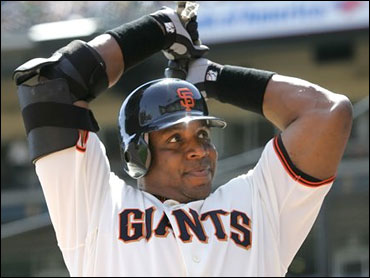 
I have had one and only one hero in life: Willie Mays. Because of Willie, I have been a San Francisco Giants fan for as long as I can remember. So it pains me to see Barry Bonds, Willie's godson and a Giant, poised to steal and besmirch a proud piece of American history.

Baseball is the oldest purely American sport, with the richest and most measured history. Its records are milestones in history, big punctuation marks in the narrative kids grow up with and symbols of the times when the records were set.

When Bonds hits his 756th home run in June or July, he, too, will make his indelible mark on American history. Indeed, he is a rather perfect representative of our times and the spirit of both our sports and our leaders and celebrities. Bonds' record is ignoble and unfair to baseball history for the simplest of reasons: He cheated.

As a kid, I was a regular baseball fanatic. I memorized statistics, collected cards, pretended to be a pro when I played catch with my pal John Strauss and had a Willie Mays fan club in the storage room. I was a lousy player. There was nothing poetic or metaphysical about baseball to me, yet.

That changed somewhat in the summer of 1997 when I was producing a story about the 50th anniversary of Jackie Robinson's first game in the majors with correspondent Russ Mitchell. We were the first journalists to be given a look at the letters Robinson wrote to his wife all through his career, which were the basis of a new biography by Arnold Rampersad.

Russ and I went to interview Roger Wilkins, the historian, writer and civil rights intellectual. Wilkins grew up black in Grand Rapids, Mich., and listened devotedly to baseball on the radio. He was about 15 when Jackie Robinson broke the race barrier.

I will never forget listening to Wilkins talk about how as a teenager, the baseball diamond was the one place it seemed a black man could get an absolutely fair shake. Balls were balls, strikes were strikes and hits were hits. Even if an umpire blew or a call or a cracker hothead came into Robinson's second base with spikes up, the fans could see the truth.

Wilkins had probably done a couple thousand TV interviews in his life. But his gaze was vague and his eyes were moist as he talked about how the baseball field was, in his eyes, the only level playing field for black people in 1947.

To some degree, that's part of why most people like sports. Skill, tenacity and accomplishment win, fair and square — or they should. Not too many people will feel that way when Hank Aaron moves to second on the home run list.

Joe DiMaggio's hitting streak lasted for 56 remarkable games. No one thought that record would ever be broken, and still no one thinks it will be.

Roger Maris' record of 61 homers in '61 was astounding, too. But it fell, probably to steroids. Bonds now has that record, too.

Lou Gehrig's Iron Man record of 2,130 games was considered unassailable as well. Its nobility was sealed when he was stricken with ALS — known now as Lou Gehrig's Disease — but he told the crowd at Yankee Stadium that he was the "luckiest man on the face of the earth." I was at Camden Yards in Baltimore when Cal Ripken broke that record. Cal earned it, and did so with honor. A whole nation of baseball fans recognized that. When the game became official in the fifth inning, Cal got a sobbing, screaming 22-minute Standing-O.

I happened to walk to my car with Johnny Apple, the legendary New York Times reporter. He said he had never seen a crowd of people meld into one, emotional, united human force like that except when Robert Kennedy addressed the Democratic National Convention in 1964 after his brother's assassination. Historians also clocked the ovation Kennedy received at 22 minutes.

The biggest number of all was 714 — Babe Ruth's home run record. When Aaron broke it, the only dark cloud was racism. But every true baseball fan respected Aaron — his ability, his stamina and his character. The Babe's record fell with honor, like Gehrig's, his teammate.

Aaron's record will fade without honor. Bonds cheated. It's simply an added sadness that Bonds truly is one of the greatest hitters in baseball history, even without steroids. Some say he's the best. That doesn't matter. Baseball fans know that. Bonds has been and will always be followed by boos. He is like all too many people in the public eye today.

Willie still sticks up for his godson. That's proper; it's personal and it's loyal. But Barry didn't play on the same level field as Willie, Hank, Cal, Joe and the Babe.


If you prefer e-mail to public comments, complaints or arguments, send them along to Against the Grain. We may occasionally publish some of the interesting (and civil) ones, sometimes in edited form.