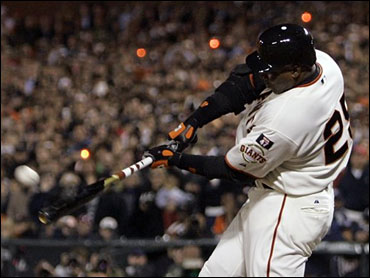 Barry Bonds hit No. 756 to the deepest part of the ballpark Tuesday night, and hammered home the point: Like him or not, legitimate or not, he is baseball's new home run king.

Bonds broke Hank Aaron's storied record with one out in the fifth inning, hitting a full-count, 84 mph pitch from Washington's Mike Bacsik 435 feet to right-center field.

"Thank you very much. I got to thank all of you, all the fans here in San Francisco. It's been fantastic," he said shortly after crossing home plate, his godfather, Willie Mays, at his side.

Conspicuous by their absence were the commissioner and Hammerin' Hank himself.

Though he was on hand for the tying homer three days ago, deciding to put baseball history ahead of the steroid allegations that have plagued the Giants slugger, Bud Selig wasn't there for the record-breaker.

"While the issues which have swirled around this record will continue to work themselves toward resolution, today is a day for congratulations on a truly remarkable achievement," Selig said in a statement, released after he spoke to Bonds by telephone.

White House spokesman Tony Snow told reporters this morning that the president congratulates Bonds for breaking "one of the most treasured records" in all of sports. Asked if the president believes the record was compromised at all by allegations of steroid use, Snow noted there's a league-wide investigation of steroid use which the president commends. Snow said he didn't know if Bush would be calling Bonds.

In his State of the Union message in 2004, Knoller notes, President Bush denounced steroid use by athletes calling it dangerous and saying "it sends the wrong message -- that there are shortcuts to accomplishment, and that performance is more important than character."

As for Aaron, he said all along he had no interest in being there whenever and wherever his 33-year-old mark was broken. He was true to his word, but he did offer a taped message of congratulations that played on the stadium's video board.

"It is a great accomplishment which required skill, longevity and determination," he said.

"Throughout the past century, the home run has held a special place in baseball and I have been privileged to hold this record for 33 of those years. I move over now and offer my best wishes to Barry and his family on this historic achievement.

"My hope today, as it was on that April evening in 1974, is that the achievement of this record will inspire others to chase their own dreams," he said.

A woman who answered the phone at Aaron's home in Georgia shortly after Bonds' homer said that Aaron was asleep.

With a long, satisfied stare, Bonds watched as the ball sailed over the fence and disappeared into the scrum in the first few rows. Then he raised both arms over his head like a victorious prize fighter, fists clenched, and took off.

His 17-year-old batboy son Nikolai was already bouncing on home plate as Dad rounded third and ran the final 90 feet to make it official. After a long embrace, the rest of the family joined in — two daughters and wife, Liz. And then there was Mays, who removed his cap and congratulated his godson.

Bonds saved his most poignant words for last, addressing his late father, Bobby.

"My dad," he said, looking to the sky and choking back tears. "Thank you."

Bonds had wanted to break the record at home, where he would be assured of a friendly crowd. They were all right, unlike in San Diego where some fans held up signs with asterisks indicating that his power was steroid-induced.

He had already doubled and singled before hitting the solo home run. He took his position in left field to start the sixth, then was replaced and drew another standing ovation.

A fan wearing a Mets jersey wound up with the historic ball. Matt Murphy of New York emerged from the stands with the souvenir and a bloodied face, and was whisked to a secure room.

Even with Bonds at the top of the chart, fans will surely keep debating which slugger they consider the true home run champion. Some will continue to cling to Aaron while other, older rooters will always say it's Babe Ruth.

"It's all about history. Pretty soon, someone will come along and pass him," Mays said before the game.

Bonds homered exactly three years after Greg Maddux earned his 300th victory at the same ballpark. It's been quite a week of baseball milestones — over the weekend, Alex Rodriguez hit his 500th home run and Tom Glavine won No. 300.

A seven-time NL MVP, the 43-year-old Bonds hit his 22nd home run of the year. Bonds broke Mark McGwire's single-season record by hitting 73 in 2001 and while he's no longer such a force, opposing pitchers remain wary.

Bonds and Giants management bickered in the offseason over contract issues. This big night was the main reason owner Peter Magowan brought back the star left fielder for a 15th season in San Francisco, signing him to a $15.8 million, one-year contract.

Bonds' once-rapid quest for the record had slowed in recent years as his age and balky knees diminished his pace. He hit 258 home runs from 2000-04, but has only 53 since then.

While steroids have tinged Bonds' pursuit, it was race that was the predominant issue when Aaron broke Ruth's mark in 1974. Aaron dealt with hate mail and death threats from racist fans who thought a black man was not worthy of breaking the record set by a white hero, the beloved Babe.

Former commissioner Bowie Kuhn watched Aaron tie the record but was not present for the record-breaker, a slight that bothered many fans of Aaron. Selig is a close friend of Aaron's and offered Bonds tepid congratulations when he tied the record.

"I think Hank is his own man," Mays said. "I think if he wanted to be here he would be here."

"When he hit 715, the commissioner wasn't there," he said. "You may not blame him because he wasn't represented the right way."

Bonds was destined for stardom at an early age. The son of All-Star outfielder Bobby Bonds and the godson of one of the game's greatest players, Bonds spent his childhood years roaming the clubhouse at Candlestick Park, getting tips from Mays and other Giants.

"I visualized him playing sports at a high level. He was 5 when he was in my locker all the time," Mays said.

In a matter of years, Bonds went from a wiry leadoff hitter with Pittsburgh in 1986 to a bulked-up slugger. That transformation is at the heart of his many doubters, who believe Bonds cheated to accomplish his feats and should not be considered the record-holder.

There are plenty of fans already hoping for the day that Bonds' total — whatever it ends up — is topped. Rodriguez may have the best chance, with his 500 home runs at age 32 far ahead of Bonds' pace.