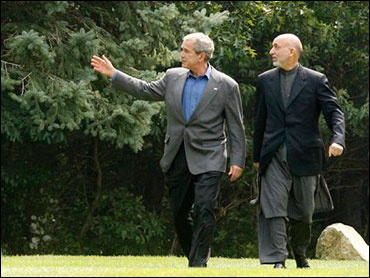 In what could be his final game with the San Francisco Giants, Bonds connected in the first inning off Los Angeles' Dennis Springer. The Giants won the game 2-1.

"This was a great, great way to end it with a victory and a home run. You can't ask for anything better," Bonds said after the game. "I never thought I could do it."

Bonds, who broke Mark McGwire's record by slugging two homers on Friday night, homered in his first at-bat Sunday after taking a day off on Saturday. He singled in the third, popped out in the sixth and flied out in the eighth.

Instead of feeling the pressure in the final few games of the season, Bonds finished the year in style — he hit four homers in his final three games.

Bonds shook his head and shrugged his shoulders, almost in disbelief at what he has accomplished this season, as he took the field for the top of the second inning.

When McGwire set his record of 70 homers in 1998, a mark then thought unbreakable, he hit two homers on the final day of the season and five in his final three games.

Bonds' homer, onto the arcade above the right-field fence, was the 567th of his career — leaving him six behind Harmon Killebrew for sixth all-time. Bonds started the season 17th on the career list.

The ball was grabbed by Patrick Hayashi, 36, from nearby Santa Clara County, after a scrum among fans on the arcade.

Bonds' 73rd home run also wrapped up another major league record for the Giants' left fielder. He finished the season with a slugging percentage of .863, easily surpassing the record of .847 set by Babe Ruth in 1920.

And it also secured another major league record for Bonds — he homered every 6.52 at-bats this season, breaking the record of a homer every 7.27 at-bats set by McGwire in 1998.

The solo homer came on a full-count knuckleball from Springer. It gave Bonds a career-high 137 RBIs.

Fans accustomed to Bonds' heroics this season gave him a standing ovation, and he stepped out of the dugout for a quick curtain call.

Before his second at-bat, fans chanted "Five more years!" — a reference to comments by Bonds' agent that he will seek a five-year deal after this season.

Even though Bonds is having one of the greatest offensive seasons in major league history, he may not be back in San Francisco next year. He is eligible for free agency after nine seasons with the Giants, who may not be able to afford his demands.

Bonds, 37, earned $10.3 million this season in the last year of a three-year, $22.9 million contract extension. His agent, Scott Boras, is expected to seek a contract worth perhaps $20 million a year starting in 2002.

Bonds would like to return to the Giants, the team of his godfather — Willie Mays — and one of the teams his father, Bobby Bonds, played for. He made that clear Friday night in a ceremony following his recor-breaking homer.

"I don't know what my future is," he said. "I love San Francisco and I love you fans. My family knows, God knows, I'm proud to wear this uniform."

But the Giants have a projected payroll of $66 million next season, and signing Bonds would mean committing nearly a third of that amount to one player. Also, the Giants may not be prepared to offer the five-year deal Boras apparently is seeking.

"It's a simple equation," general manager Brian Sabean said. "We'll only pay him what we can pay him to put a competitive team on the field. If he's looking to break the bank, our chances to sign him diminish."

And Giants owner Peter Magowan, serenaded with chants of "Sign him! Sign him!" during Friday night's celebration, said it's not such a simple situation.

"It sounds like a stupid question — are your chances to win better with Barry or without him," Magowan said. "But the biggest question is, depending on what we have to pay him, how much do we have left over to win with?

"Barry has said all the right things. His primary motivation is to win, and he doesn't want to saddle the Giants with a number that would prohibit us from having that chance. He has said that money is not the most important thing. But Scott Boras hasn't said that, and it remains to be seen what comes out of the negotiating process.

"I'm sure he'd take less to stay here," Magowan added. "How much less, who knows."