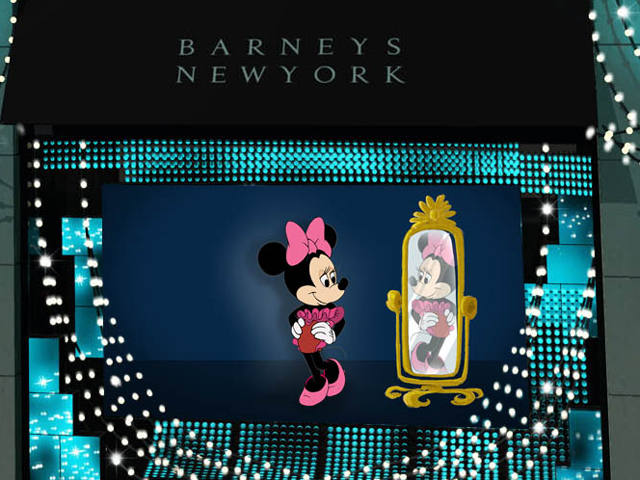 Did Minnie Mouse do a catwalk cleanse?

The Barneys display puts Disney characters on the runway in front of animated versions of industry bigwigs in a short film that features Minnie's daydream sequence strutting her stuff in Paris in a hot-pink, ruffle-covered Lanvin dress.

Runway Minnie gets only a few seconds of face time, but when she does, she transforms into a model who is tall and thin with longer legs, leaner arms and daintier gloved hands than the polkadot-loving character who typically embraces her curves from head to toe. Daisy Duck, Cruella De Vil and Goofy get similar insta-slim treatments.

For most of the film, however, Minnie and crew look their usual selves. Minnie has her big bows, round face and signature wide-width pumps.

"Viewers will recognize the Minnie they know and love, as she takes a turn on the runways of Paris and in her own mirror, wearing a custom creation from one of the world's greatest designers," Barneys said in a statement to The Associated Press. "Some of the early highly stylized fashion illustrations have garnered significant attention, however the reality is Disney's Minnie Mouse proves that true fashion lovers come in all styles and sizes."

Still, the makeover has prompted several online petitions targeting Barneys and Disney for perpetuating the skinny-model image that the fashion industry has been criticized for many times over.

One of the louder voices is Taren Stinebrickner-Kauffman, executive director and founder of SumofUs.org, a consumer watchdog group. In just over a week, the SumofUs.org petition has attracted close to 80,000 online "signatures." There are a half-dozen additional petitions up on Change.org, including one with more than 135,000 supporters. It was launched by Ragen Chastain, who self-published the book "Fat: The Owners Manual - Navigating a Thin-Obsessed World with Your Health, Happiness and a Sense of Humor Intact."

Stinebrickner-Kauffman said she took this issue on after a friend of hers - a mother to a grade-school daughter - posted about it on Facebook. "Girls have seen Minnie Mouse as a healthy character in their lives...to have her image subverted like that is troubling."

Girls are "bombarded" by impossible physical figures in the media, says Stinebrickner-Kauffmann, and to have such a familiar face - and shape - be turned into such a skinny Minnie seems like it could fuel the insecurities young women often have about themselves and their bodies.

Models are indeed taller and thinner than most women, and those features are further exaggerated in fashion illustrations used by designers - and by Barneys in its promotional material for the Nov. 14 launch of its displays, says Steven Stipelman, assistant chair of fashion design at the Fashion Institute of Technology.

Those are the images that are being protested, as the film short has not been released beyond the trailer provided to The Associated Press. The film does not feature the drawing that has been the focus of criticism, though Minnie does undergo a transformation as soon as she steps onto the catwalk in front of Lanvin designer Alber Elbaz, International Herald Tribune reporter Suzy Menkes and Harper's Bazaar global fashion director Carine Roitfeld, among other recognizable faces. Runway Minnie even masters the straight-ahead stare and bouncy strut that real-life models aim to master.

She then comes quickly back to reality and her everyday appearance, and the film ends with her just as happy as herself window-shopping on Madison Avenue as she was in Paris.

"Fashion drawing is a fantasy," said Stipelman, who teaches illustration. "They are conveying a mood, a feeling and attitude.

It's supposed to make you feel like you want the attitude of this person, not like you're going on a diet so you can look like this person."

He adds, "It looks exaggerated because you know what you're comparing it to. If you didn't know what Minnie looked like, you probably wouldn't even notice."

Tell us: What do you think about the Barneys display?