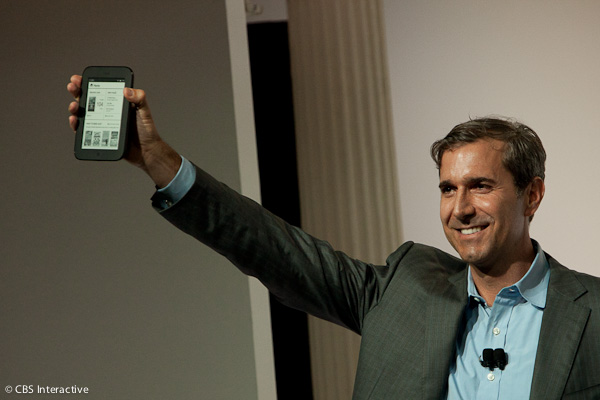 (CBS News) Bookstore giant Barnes & Noble is unveiling their new HD Nook and a new video service on Wednesday. Customers will be able to watch movies and TV shows on the tablet device, which the company claims trumps the products offered by Amazon and other competitors.

Barnes and Noble CEO William Lynch joined "CBS This Morning" on Wednesday to talk about the new device and what it may mean for the future of books.

Addressing possible factors behind the company's recent success, Lynch said "I think it's our attention to our customers and our reading experience ... I'm not just talking about books. I'm talking about magazines, newspapers, children's books of any of the tablets."

And Lynch maintained that Barnes & Noble's Nook tablet is a cut above Amazon's Kindle and other e-readers on the market. "They're lighter ... they're easier to hold, they're thinner," he said. "They also have a high-resolution screen ... also they have family profiles, so if you have a family and you don't necessarily want them reading your '50 Shades of Grey,' you can easily transform the device to a kid's device."

Despite the rise of the digital era, Lynch believes his company's brick-and-mortar stores will be around for a long time.

"Our stores are the last place in this country to browse a wide selection of books ... it's a community service but it's also a great business for us," he explained, before allowing that "the growth will come from digital."

He went on to add, "With books, we're not going to see what we saw with the music industry. People love holding books, they appreciate the object."

Addressing rumors that Barnes & Noble almost bought the now-defunct Borders chain of bookstores, Lynch said "We looked at it ... we felt like our stores -- 76 percent of the Borders stores were within two miles of our stores -- so we felt like we had the stores in those communities and that was a big reason we decided to pass."

Lynch also provided some heartening numbers for the book industry -- he said 57 percent of books in the U.S. are bought by women and that more young people seem to be reading. "Our juvenile business is up double digits," he said.

And, touching on the incredible success of the "50 Shades of Grey" series, Lynch explained the phenomenon, "It was the first book we saw start as an independent, a big published picked it up, and it became a juggernaut."