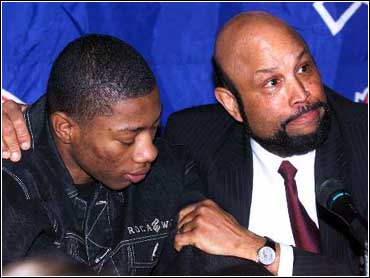 St. John's sophomore guard Erick Barkley was reinstated by the NCAA today, ending his suspension at two games. He will play Saturday against Villanova.

The initial ruling over Barkley's violation of NCAA rules was for a three-game suspension but St. John's appealed to the Division I Subcommittee on Student-Athlete Reinstatement and it was upheld.

Barkley, who leads the team in scoring at 16.9 points per game, missed last Saturday's game against Boston College and Tuesday's game at Providence both Red Storm victories. He has been practicing with the team.

"The university is pleased with the subcommittee's decision and appreciates its members' understanding of the case," St. John's athletic director Ed Manetta said. "Erick has shown a tremendous amount of character through this process and we re happy for him."

The violation in question concerned exchanging cars with a family friend, two sources familiar with the case have told The Associated Press.

Barkley traded his late model Jeep Cherokee for a bigger but older Ford Expedition that belongs to a family friend, said a source close to Barkley and another with knowledge of the matter, both speaking on condition of anonymity.

That exchange would have been a violation of NCAA rules if Barkley received preferential treatment because he is an athlete or if it constituted possible payback for when he turns professional.