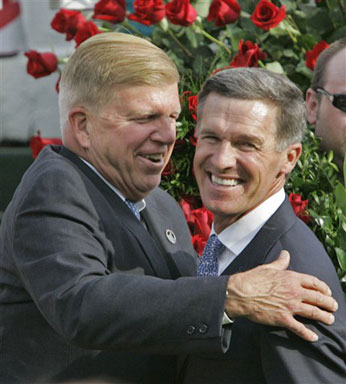 Erick Barkley returned from his two-game suspension with 16 points - including two 3-pointers in the final six minutes and seven assists and St. John's beat Villanova78-75 Saturday.

The sophomore guard was suspended by the NCAA over a rules violation involving his trading cars with a family friend. The suspension originally was three games Barkley missed victories over Boston College and Providence but it was shortened by one game Thursday following an appeal by St. John's.

A drive by Gary Buchanan had the Wildcats within 74-73 with 27 seconds left. Lavor Postell of St. John's made two free throws six seconds later to restore the lead to three points.

Buchanan then turned the ball over when he tried to dribble through defenders in the open court and Barkley made one of two free throws with 16 seconds left for a 77-73 lead.

Jermaine Medley scored for Villanova with 11 seconds left and Postell made one of two free throws a second later for the final score.

Villanova's final chance at a tie ended when Buchanan had the ball in the corner but was tied up by Anthony Glover.

Barkley, who didn't speak with the media following the reduction of his suspension, made a statement on his sneakers Saturday. He had "NCAA" written on the side of each one. On his right heel it said, "Free at Last," and on his left it said, "Only God Can Judge Me."

Postell and Glover each had 13 points for St. John's, while BootsThornton added 11.