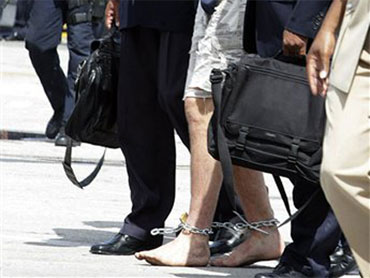 The teenage "Barefoot Bandit" who allegedly stole cars, boats and airplanes to dodge U.S. law enforcement was nabbed Sunday as he tried to make a water escape. He was brought handcuffed - and shoeless - to the capital to face justice, abruptly ending his two-year life on the lam.

Colton Harris-Moore was arrested before dawn in northern Eleuthera, said Sgt. Chrislyn Skippings, a spokeswoman for the Royal Bahamas Police Force. A contingent of high-ranking officers traveled to the island and took the suspect to Nassau, the country's capital, where he faces possible extradition to the United States.

True to his nickname, Harris-Moore was barefoot when he was marched in handcuffs off a plane and into a police SUV in the Bahamas, reports CBS News justice correspondent Bob Orr. He kept his head down and ignored questions shouted by reporters. Escorted by six police cars and SUVs, the teen had close-shorn hair and wore short camouflage cargo pants, a white long-sleeved shirt and a bulletproof vest. Police blocked traffic on the route to the Central Detective Unit where he was taken for processing.

Island police had been searching for the wily fugitive since he allegedly crash-landed a stolen plane a week ago on nearby Great Abaco Island, where he was blamed for a string of at least seven break-ins.

Authorities caught Harris-Moore on a boat near Harbour Island, a small tourist destination just off mainland Eleuthera, said a senior police official who spoke on condition of anonymity because he was not authorized to discuss the case. He said Harris-Moore initially attempted to flee but police shot out the engine on his boat.

Harris-Moore, who has been running from American law enforcement since escaping from a Washington state halfway house in 2008, gained fame and thousands of fans who admired his ability to evade arrest. He is suspected of stealing cars, boats and at least five planes - including the aircraft he allegedly lifted in Indiana and flew more than 1,000 miles to the islands off Florida's coast, despite a lack of formal flight training.

The teen is a skilled outdoorsman who honed his abilities growing up in the woods of Camano Island in Puget Sound about 30 miles north of Seattle.

Island police picked up his trail in Eleuthera after recovering a 44-foot power boat stolen from a marina on Abaco, 40 miles to the north.

Burglary victims in Eleuthera told The Associated Press on Saturday they had little doubt the lanky, 6-foot, 5-inch fugitive was on the island.

Ferry boat captain Freddie Grant said he was returning from Harbour Island on Wednesday evening when he saw a tall, white teenager bathing or swimming in an inlet near the ferry landing. Ferry service employee Stan Pennerman also said he saw Harris-Moore lurking in the woods the same day.

Neither man thought much of it until they noticed the next morning that somebody had damaged the ignition system on three of their boats.

A bar at the ferry landing was also burglarized Wednesday night by a thief who cut a screen to break in, dismantled a security light, and moved the television's remote controls, said Denaldo Bain, the 30-year-old manager of Coakley's International Sporting Lounge.

"He was watching television. He was just chilling," said Bain, who also said he saw the teenager in the inlet.

Sightings were later reported elsewhere in Eleuthera, including at a bar in Governor's Harbour, 50 miles to the south, where one witness said Harris-Moore bought drinks for a girl. Others claimed to see him driving a rental car around the island Saturday.

Harris-Moore's mother, Pam Kohler, has said that he had a troubled childhood. His first conviction, for possession of stolen property, came at age 12. Within a few months of turning 13, he had three more.

But Kohler also has publicly defended her son, saying the allegations against him are exaggerated. She has told the AP that she hoped he would flee to a country that doesn't have an extradition treaty with the United States.

Reached early Sunday at her home on Camano Island in Washington state, she said she'd heard the news about the arrest but had no comment.

Harris-Moore was sentenced to nearly four years in juvenile detention after being caught in an unoccupied home in 2007, but he did well enough there that he was transferred to a group home, where he sneaked out of a window more than two years ago.

He was dubbed the "Barefoot Bandit" for allegedly going shoeless during some crimes and once allegedly leaving behind chalk footprints as a calling card.

Harris-Moore has nearly 58,000 fans on Facebook, some of whom on Sunday posted disappointed messages or promoted T-Shirts and tote bags with the words "Free Colton!" and "Let Colton Fly!"