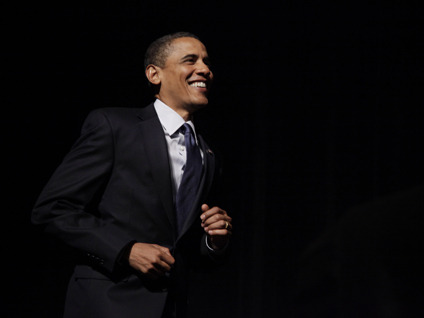 You could buy out the theater to a Broadway show for what it'll cost one or two couples to attend President Obama's fundraising appearance tonight in Los Angeles for the Democratic Congressional Campaign Committee.

Slap down $30,400 and you and the spouse get to attend the event co-hosted by Hollywood icons Barbra Streisand and Steven Spielberg, among others. For that price, the maximum an individual can contribute to a political committee in a year, you get your picture taken with the president.

The fundraiser is being held at the home of TV executive John Wells, best known for his work as a writer, director and producer on the series "ER," "Third Watch" and "The West Wing."

The big-money contributors get to attend a cocktail reception and dinner - at which they'll be entertained by Idina Menzel, the singer/actress who created the role of Elphaba in the original Broadway production of "Wicked."

The DCCC is offering the less well-heeled a bargain priced ticket of $2,500, but that only gets you into the pre-dinner reception and no photo with Mr. Obama.

Between now and Wednesday, Mr. Obama will criss-cross the country, visiting five states and appearing at six fund-raisers in all.

It began today in Wisconsin, where at a fundraiser for Democratic gubernatorial candidate Tom Barrett, Mr. Obama again blasted Republicans for obstructing his economic and social programs.

Though he ran on the slogan "Yes, We Can," he said the GOP slogan this year ought to be "No, We Can't."

He said Republicans have said "no on closing loopholes to companies that ship jobs overseas: no on the tax cuts for small businesses; no on the clean energy jobs; no on the railroad and highway projects."

The president singled out Senate Republican Leader Mitch McConnell (R-Ky.) for saying "I wish we were able to obstruct more."

"Obstruct more? Is that even possible?" Mr. Obama said incredulously, drawing laughter from 1,300 supporters who contributed $250 each to Barrett's campaign.

A spokesman for McConnell was quick to point out that Mr. Obama failed to convey McConnell's full thought as quoted in the New York Times.

"I wish we had been able to obstruct more," McConnell said of the Democratic agenda.

In his Milwaukee fundraiser today, Mr. Obama sought to turn the tables on Republicans, saying "the worst thing" the nation can do is return to the Republican policies that he says got the economy into its current mess.

He said the GOP response to Americans in trouble amounts to "tough luck - you're on your own." And that'll be the rhetoric Mr. Obama has in store for all the fundraisers he's doing this week.

The six events over three days comprise his most intensive period of politicking to date in his presidency.

It will bring to 40 the number of fundraisers he's done this year.

Those 40 events have raised over $56 million dollars for the Democratic party and its candidates. Add in the 28 fundraisers he did in 2009 and his total since taking office tops $76.8 million.

It's a formidable amount, but less than the fundraising numbers for the same period of time by President George W. Bush.

He did 47 fundraisers to this point in his 2nd year in office - generating $157 million.

But the limits on contributions to political parties were much larger back then.