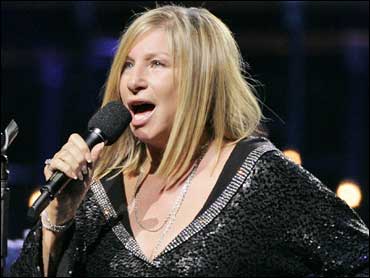 Barbra Streisand canceled her concert in Rome next month, a move that followed protests by Italian consumer groups angered by what they said were excessively high ticket prices.

Concert organizers indicated the decision was not connected to the outcry, saying that production delays had forced them to scrap the June 15 concert in the capital's Stadio Flaminio, what would have been the singer's first concert in Italy and the start of her European tour.

"We met with unexpected production delays," said a statement by tour promoter Michael Cohl posted on the Web site of Milano Concerti, the Italian organizer of the event.

"We deeply apologize to the fans in Rome," Cohl said in the statement, adding that ticket holders would be refunded and given the opportunity to book a spot for one of Streisand's other European concerts.

Photos: The Men In Streisand's Life

Organizers were not immediately available Monday morning for further comment.

Last week, consumer groups Codacons and Adusbef protested as "absurd and shameful" ticket prices ranging from just under $200 to more than $1,200, calling on authorities to deny Streisand use of the 24,000-seat stadium.

The stadium "is public property and cannot be used for immoral deals that are shameful to a civilized country," the groups said in a statement.

Instead of the Rome concert, Streisand's Web site listed a new date — a June 18 concert in Zurich, Switzerland — as the kickoff for the star's tour.