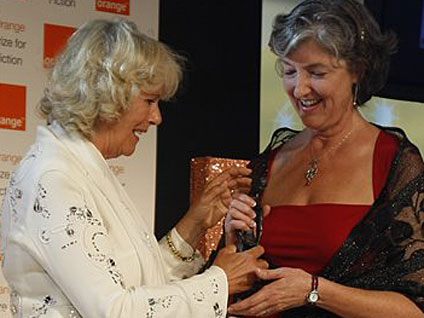 Kingsolver received the $45,000 prize from Camilla, Duchess of Cornwall, Wednesday night at London's Royal Festival Hall. The prize is open to any novel by a woman published in English.

The 55-year-old Kentucky-born Kingsolver said she was "stunned and thrilled" by the honor.

"The Lacuna" tells of the epic journey of a man who moved between the United States and Mexico amid revolution and war. It was up against five other novels, including Mantel's Tudor tale "Wolf Hall," which won Britain's Man Booker Prize and the National Book Critics Circle Award in the U.S.

"We chose "The Lacuna" because it is a book of breathtaking scale and shattering moments of poignancy," said chair of the judges Daisy Goodwin. "We had very different tastes on the panel, but in the end we went for passion not compromise."

Kingsolver was shortlisted for the Orange Prize in 1999 for the best-selling "The Poisonwood Bible."

Her other novels are "The Bean Trees," "Pigs in Heaven," "Animal Dreams" and "Prodigal Summer." She also wrote a short story collection, titled "Homeland and Other Stories."