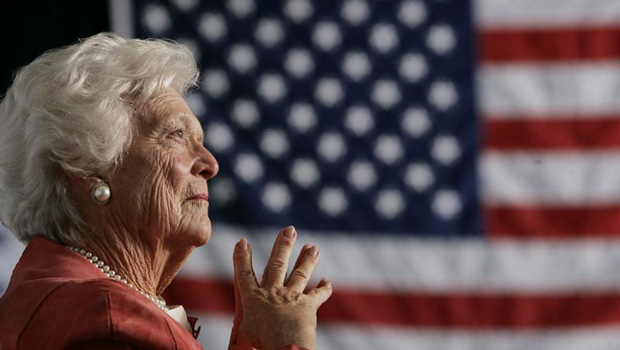 She is at Methodist Hospital in Houston, said Jean Becker, chief of staff to former President George H.W. Bush.

"Former First Lady Barbara Bush was admitted to Methodist Hospital in Houston's Texas Medical Center yesterday for treatment on a respiratory related issue," according to a statement from the former president's office. "She is in great spirits, has already received visits from her husband and family, and is receiving fantastic care. Updates will be issued when warranted."

The Bushes' home is in Houston.

Mrs. Bush had a reputation for bluntness when her husband was president.

The Bush family matriarch had heart surgery in March 2009 for a severe narrowing of the main heart valve. She also was hospitalized in November 2008, when she underwent surgery for a perforated ulcer. In 2010, she was admitted to the hospital after having a mild relapse of Graves disease, a thyroid condition for which she was treated in 1989.

Update, Jan. 1, 2014: CBS News has confirmed Barbara Bush is being treated for pneumonia. She is said to be responding well to treatment at a Houston hospital.

President Obama on Wednesday released the following statement: "Michelle and I send our best wishes to Mrs. Bush for a speedy recovery.  Barbara is blessed to have both a loving, supportive family by her side and a vibrant spirit that we hope will have her feeling better soon.  I know I speak for Americans everywhere when I say that our thoughts and prayers are with Barbara and her family on this New Year's Day."