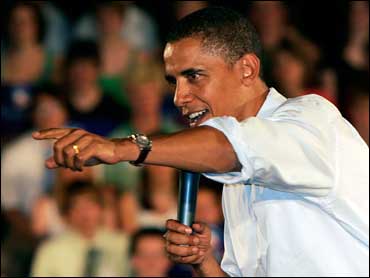 This story was written by Radomir Avila of the Daily Trojan at the University of Southern California.

"The arc of the moral universe bends towards justice. Here's the thing, young people, the arc doesn't bend on its own; it bends because you put your hand on that arc and you bend it in the direction of justice," said Sen. Barack Obama, D-Ill., in a YouTube video broadcast Wednesday night to an audience of about 150 University of Southern California students at Taper Hall.

Moments later, the TroyTones a capella group was on stage, singing "Any Way You Want It" in toe-tapping melody.

"Barack the Vote" was a gathering of song, comedy, spoken word and poetry in a rally to support Obama's 2008 presidential campaign.

Organized by USC's chapter of Students for Barack Obama and former Trojan Vision personality and USC alumnus Dave Taylor, the event was a mix of entertainment and serious political messages.

"We want this event to be a jumping board to say that we are here," said Bret VandenBos, leader of the Obama student group. "We want it to be a combination of fun and politics."

VandenBos said his group has 300 to 400 volunteers signed up to campaign on behalf of Obama. With this event, he hopes to double that number within the month.

The event comes in light of polls that have shown an increasing divide since the summer between Obama and the front-runner of the Democratic race, Hillary Clinton, D-N.Y. A recent Gallup poll asked voters whom they would support in the Democratic primaries if the race were only between Clinton and Obama; 63 percent of respondents said Clinton, whereas 42 percent said Obama.

"It's not about her versus us," VandenBos said. "It's about the America we want to build."

Taplin expressed his disapproval for the Bill Clinton presidency and spoke out against his wife as a false progressive.

Many student Obama supporters, when asked to compare Obama and Clinton, chose change over experience in the debate that has arisen within the Democratic Party over the last couple months. This theme of the campaign has been part of the effort to court the youth vote.

"I remember when [Sen. Obama] came to USC in 2006 and we saw the reaction - that here is a new voice that is willing," said political science professor Kevin Acebo.

"Obama can reach out more to young people. He's handsome, he's young, rap artists we listen to sing about him," said Dominic Riley, a senior majoring in psychology. "All we've been able to relate to the last several years has been President Bush; this is the chance for something new."

Besides branding himself as the voice of change, Obama has courted the youth vote through online media. He currently has the most Facebook friends of any presidential candidate.

"The Internet and new media reach out the young demographic," Acebo said. "This isn't your traditional campaigning."

"If it's so accessible, if its always available for you to look up, it'll spur student interest," Riley said. "Seeing that a friend and I are both friends with Barack on Facebook, and seeing a friend at an event such as this, sparks interest."

Though many students left during the two-hour event, and the performers and students from other colleges made up a portion of the audience, organizers hoped the event would promote Obama's platform and spur involvement in the political process.

"A lot this day has raised awareness, but without action, it is smart people doing nothing to fight injustice," VandenBos said.
© Daily Trojan via UWIRE